“For quite some time I had been looking for the ideal deck that I could relate to and believe me there are some amazing decks out there but I always came back to the same conclusion. I wanted to create my own. So here it is…” – Mary Griffin, creator of the Hezicos Tarot

There is so much to love with the self-published Hezicos Tarot by Mary Griffin.

In fact, I can’t remember a time I was so infatuated with a deck, from the time I saw online images to working with the actual cards for weeks.

Painted with gorgeous watercolor technique and a stunning attention to detail, the illustrations of the Hezicos Tarot glow with pastel hues absent of card borders or intrusive banners. It’s a deck that fuses fanciful visions with universal themes, including those painful (the bleeding fellow lying on a large mushroom, impaled with blades in the 10 of Swords), playful (two children on the beach, decorating a shell house in the 6 of Cups), contemplative (a seated, elderly Hierophant) and loving (adoring glances and goblets exchanged by a couple in the 2 of Cups). 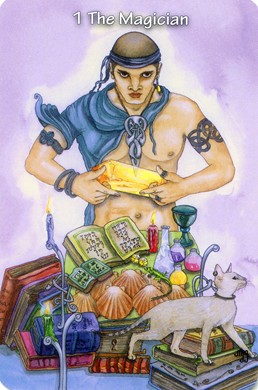 The Minor Arcana in the Hezicos Tarot are Cups (water), Rods (fire), Coins (earth) and Swords (air), with the court cards following the Page, Knight, Queen and King designation. The courts are exceptional, with each figure exhibiting distinctive accoutrements and originality of visage, facing various directions for added intuitive interaction.

The cards measure approximately 4 ½ x 3 inches with a matte finish and an adorable, reversible backing in brown tones.

The 56-page full-color companion booklet provides detailed descriptions of the paints, pens and papers used for the illustrations, as well the deck creation process from start to finish. Miniature images of each card are featured along with upright and reversed card meanings, and Ms. Griffin explains deck storage, shuffling, significator use and three spreads.

While the Hezicos Tarot dazzles as eye candy, rest assured that it is an accurate, clear working deck (as opposed to just a pretty art deck) with faint echoes of RWS imagery—although the creator reinterprets that tradition with a skilled hand and heart-based sensibility.

Each reading I’ve done with this deck has been precise and pointed. In fact, one day I drew the Hanged Man, which surprised me (I rarely draw this card—can’t remember the last time in fact!). Maybe it was indicating a new way of seeing…something, I thought. Or having a bit of downtime in the near future? Well! Turns out that two days later, a snowstorm with subzero temperatures hit our area. The electric died, and we were without power or heat for over two days. Hanged Man (suspension!), indeed! 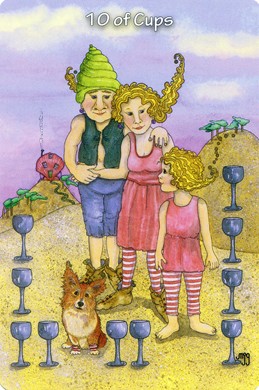 Every time I open the oh-so-pretty box (it’s a painted package!) and see the cards, my heart gives a gentle leap and I break out in a smile. How many Tarot decks can do that? It’s joy in a box, truth in whimsy—78 works of art.

The Hezicos Tarot would be wonderful for children and the child-at-heart—rigid “by the book” grumps need not look here. It’s one of those rare “must have” decks that belong on the shelf of very Tarot reader and deck collector. I absolutely love this deck; if you’re as entranced and delighted by the online imagery as I was, I assure that the Hezicos Tarot is even more lovely in person.

You can order the Hezicos Tarot directly from Mary Griffin, who ships internationally for free (how cool is that?). The box, cards and companion booklet rivals those mass-marketed by publishing houses, and, in some cases, surpasses them. A truly top-notch offering in production value and artistry. Highly recommended!

To see 17 more images from this deck, click here.

-- Janet Boyer, author of Back in Time Tarot and founder of the Tarot Classroom