“Fairy tales provide the ideal format for self-exploration. The themes, motifs, archetypes, and symbols bring us to a place of shared experience, where our own individual struggles can be easily assimilated into those of the characters from the story. They help to free the mind by offering us an atmosphere of wonder.” - From
Once Upon a Time…, the companion book to the Fairy Tale Tarot

My very first Tarot deck was based on fairytales (Inner Child Cards). I mistakenly thought that the familiar, magical stories would gently lead me through the mysteries of Tarot, making my studies easier and more enjoyable than perhaps a traditional learning curve through the cards.

How wrong I was!
It turns out that fairytale themed Tarot decks (there are four known to me), are among the most challenging. Perhaps this is because of the archetypal layers that may reside in just one fairytale; when viewed through a psychological or Jungian lens, the enchanting stories of our youth gain complexity and profundity.

Back in September 2009, I happened to pick up an issue of O Magazine and was thumbing through the pages during breakfast.

I saw a full-page review by Chandler Burr for Dolce & Gabbana's new five-scent Fragrance Anthology Tarot-inspired collection (click here to go to Dolce & Gabbana's site to find out more), but wasn't surprised since I had known about it for several months.

So anyway, I look closer this morning and guess what I see in the table reflection (where the perfumes are sitting in the photo)? Images of the Deviant Moon Tarot! Holy cow, I thought. So I scrambled to call Lynn Araujo at U.S. Games (she didnt' know about it) because I was so excited.

Here's a closer view where you can make out The Magician, The Empress, The Lovers, The Wheel of Fortune and The Moon from the Deviant Moon Tarot.

Of course, flip it around and you see:

Is that cool or what?! Congratulations Patrick Valenza, creator of the Deviant Moon Tarot! (To see my review of this marvelous deck, as well as 16 card images, click here.)

The Tell-Me Tarot, conceived by Arik Eyal and illustrated by Nir Cassuto, is a straightforward deck that not only depicts fully illustrated imagery, but also key words and divinatory meanings right on the card.

Designed with the beginner in mind, the keyword shortcuts and meanings printed on the card serve as a great memory aid and intuitive prompt. The imagery is colorful, pleasing, non-threatening, and dynamic.

“Imagine a well-shuffled Tarot deck formulating the blueprint for an eccentric village, every picture unfolding into a picturesque architecture, every background transforming into real ground, every portent a literal signpost. The idiosyncratic coastal village of Portmeirion, Wales is exactly such a place—a Tarot deck made manifest in mortar and gold leaf.” – From Trump L’oeil: Tarot of Portmeirion

A statue of St. Peter preaches from a balcony, while a fierce stone lion lies regally under a hedgerow canopy. Could these seemingly ordinary points of interest in the village of Portmeirion reflect the archetypal energies of The Hierophant and Strength?

No, your eyes aren't deceiving you.

A few years ago, I was thumbing through either People magazine or US Weekly--and came across this surprising ad.

The phrase below the "card" says Always Dri-Liners have unique, visible side barriers to help keep you protected, whatever the days may bring.

I'm thinking that the ad creators had to have some knowledge of Tarot because "The Protector" is assigned Roman numeral II, The High Priestess (who is, of course, associated with the moon).

Either that, or it was a very lucky guess!

-- Janet Boyer, author of The Back in Time Tarot Book 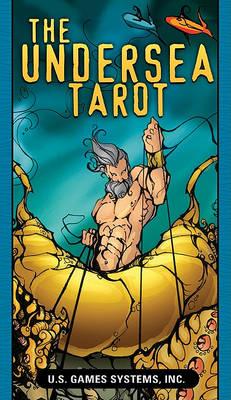 “With the seas and oceans covering nearly three-quarters of our planet, there’s little surprise that mankind has always had a deep and abiding fascination with what goes on below the waves. In our earliest recorded histories, the sea and her denizens have held an almost mythic awe.” – From the L(ittle) W(hite) B(ook) to the Undersea Tarot

The creator of the comic-tastic Fradella Adventure Tarot turns his imaginative eye towards the watery depths with his newest deck, the Undersea Tarot. Teaming up with the late artist Jeziel Sanchez Martinez and colorist Rick Hitbrunner, Fradella offers his Rider-Waite inspired take on the animal and humanoid creatures that might prowl in the undulating murk below.

Octopi and schools of colorful fish make appearances, as do sea turtles, eels, and a monstrous angler fish (found in the Hermit) card. Armored seahorses bear the Knights (of course!), while the Queens and Kings sit upon stony thrones of their domain. 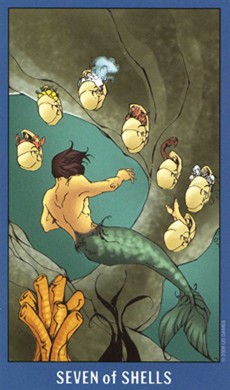 In the Undersea Tarot, the Swords suit remains intact, but the three other suits of the Minor Arcana have morphed into Shells (Cups), Tridents (Wands) and Starfish (Pentacles). Lacking the glossy coating of recent U.S. Games decks, the matte cards measure approximately 4 ¾ x 2 ½ inches with a simple reversible backing displaying a dark gray-blue “wave” banner with word “UNDERSEA” printed both directions.

An unfortunate oversight renders the Eight of Shells slightly blurry.

The 22-page LWB provides a very basic, but solid, list of meanings for each card, but probably not enough information for absolute Tarot beginners (same goes for the card imagery). However, for those comfortable reading with Rider-Waite-inspired decks—as well as fans of comic book style art and underwater realms—the Undersea Tarot is a fine addition to any collection.

To see 14 more images from this deck, click here.

“Whatever the Tarot’s original purpose, usage over the centuries has identified the inestimable value of their symbolism as a psychological and spiritual tool.” – From the companion book to The Truth-Seeker’s Tarot

Packaged in an exquisite, sturdy gold-foil box, The Truth-Seeker’s Tarot contains a 78-card deck with an 80-page full-color, hardcover companion book by David Fontana. With its soft yet vibrant illustrations, the specially commissioned artwork by Sylvie Daigneault is adorned with special gold foil touches that accent the lovely imagery without being overdone.

“The Dark Grimoire Tarots are therefore a true Clavicula due to their intrinsic nature and genesis: a key that can open forgotten doors in the darkest corners of the psyche, those doors hidden in the shadows and engulfed in spider webs. Opening those doors can mean gaining knowledge of our own fears and recognising our own dark side, learning how it can balance our whole being.” – From the L(ittle) W(hite) B(ook)

Tales of “black books”, heretical priests, forbidden rituals and dark magic weave through horror literature and films. Supposedly a mere literary device to awaken fears, reflect existential dread or “entertain” through vicarious catharsis, some individuals theorize that these types of stories—especially those of H.P. Lovecraft and The Necronomicon—contain couched truths of esoteric practices.