Tarot, pronounced "tah-ROW" or "TARE-oh", is a set of 78 cards long associated with turban-clad fortunetellers or gypsies. However, in addition to divination, modern practitioners use Tarot for brainstorming, counseling, creative writing and inspiration. Some Jungian psychologists even use the cards as a part of therapy.

The Tarot is made up of three distinct parts:

The Major Arcana: These 22 cards, originally called "Triumphs" in medieval Italy where they were used for a card game called Tarocchi, reflect universal archetypes. The Fool, The Magician, The Lovers, Wheel of Fortune and Death are some of the most recognizable cards of the Major Arcana. ("Arcana" is a word meaning "secrets"; thus, Major Arcana can be interpreted to mean "big secrets" or "large mysteries"--cycles and themes common everyone). 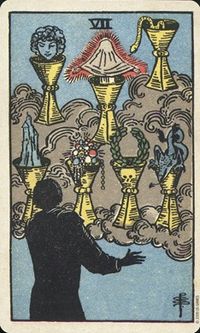 The Minor Arcana:These 40 cards mirror the numbered cards of a regular playing card deck. Instead of clubs, diamonds, spades and hearts, the Tarot Minor Arcana ("lesser secrets") suits often adhere to the suit pattern of wands, pentacles, swords and cups. These cards are said to reflect the everyday occurrences in our life--both the joyful and the sorrowful. The wands are usually associated with the element of fire and passionate action. The pentacles suit, associated with earth, covers the material world--money, health, home and possessions. Swords reflect the element of air and the realm of the intellect (including thoughts, judgments, decisions and conflict). Cups is the emotional suit, a world of dreams, notions, feelings and relationships.

The Court Cards: Similar to the face cards in a regular playing deck (minus four), these 16 cards are usually known by the page, knight, queen and king demarcation. Pages are youthful, knights are energetic, queens are nurturing and kings are governing. Some Tarot readers interpret the court cards as actual people, while others feel these cards reflect facts of our personality--with several "faces" presenting themselves within a day.

The card to the right is the 7 of Cups from the Smith Waite Tarot Centennial Edition deck, published by U.S. Games Systems, Inc.