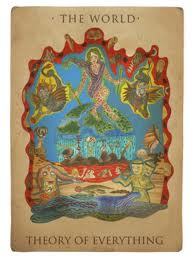 "When Arthur Edward Waite wrote The Pictorial Key To The Tarot in 1911, it's doubtful any three-card spread or Celtic Cross could have alerted him to the fact that in a century's time (well, give or take a few months) the divinatory powers of the tarot's major arcana would inspire an Australian band's second album." -- Children Collide (Australian band)

According to their official website, Children Collides’ new album The Theory of Everything has been inspired by “the divine powers of the tarot’s major arcana”  and “theoretical physics that attempts to explain all the fundamental interactions of nature and the universe.”

You can sample tracks from The Theory of Everything here.

I've listened to a few tracks and the tunes are enjoyably mellow.

Janet it was good to catch up with your blog at last. (I went looking because you disappeared off my list in Facebook). What I like about this band are their interest in both mysticism and science, which most people, including many mystics and scientists, don't realise are not enemies but actually complement each other. I would be truly honoured to link my blog to yours, if you choose. I'm sure we both have people on our subscription lists who would be interested in the other's work.

Thanks for stopping by my blog! You're not the first person who disappeared from my Facebook list! Someone hacked into my account, but I think it's all taken care of now (crosses fingers). By all means send me another Fried request! I'm very sorry about that. What's your blog URL, by the way?

I'd be honored to have you link to me. Thanks so much!

I agree that mysticism and science are complementary, especially with new discoveries in Quantum Mechanics and such.