He paints, he builds bookcases, he sculpts--and yes, folks, he even makes pies! Darn good ones, at that.

In fact, his Pear Pie that he made Saturday was the best pie I've ever had (I kid you not). It was so good, I asked him to write out the recipe so I could share it with you. Isn't he sweet?

Mix the flour, Crisco, sugar and salt with a fork until the mixture is fine crumbs. In a separate bowl, beat the vinegar, egg and water. With a fork, combine wet and dry ingredients. Form a ball, and then chill in refrigerator for 30 minutes.

When it’s time to make the crust, separate the ball into quarters (fourths). Set aside 1 quarter for the top crust and another quarter for the bottom crust. Take another quarter and cut it in half, adding ½ to the top crust dough and the other ½ to the bottom crust dough (one quarter of the total dough will be extra). Lightly flour work surface and use a floured rolling pin to roll out the top and bottom crust. Do NOT knead the dough by hand. Use the extra quarter dough within several days or freeze. 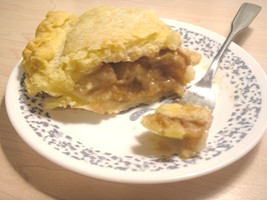