Tarot of Vampyres by Ian Daniels

“Our mind is adept at using irrational fears to protect itself from unknown primal emotions and instincts. We become rooted in a fear of the ‘other’—whether it be fear of others who seem different than us, unresolved psychological issues, or fears about our place in the natural cycles of life and death, love and separation. One of our biggest fears as humans is the fear of loss, whether of the self or of a loved one. On a personal, the fear of losing the self often reveals itself when we experience romantic love. The Vampyre myth illustrates this idea with relish…Our conscious mind resists such surrender for fear of losing our identity, while our unconscious hungers for release from the tight grip of the ego, into a place of boundless love and belonging.” – From Phantasmagoria, the companion book to the Tarot of Vampyres by Ian Daniels

Firey crosses and bloodstained lips, pallid creatures and hairy horned beasts, purple roses and ornate skulls—this is the stuff of the Tarot of Vampyres.

While the Tarot of Vampyres by Ian Daniels isn’t the first Gothic, vampire-themed Tarot to enter the marketplace, it’s arguably the finest—thanks to both the superb card illustrations and the exceptional 301-page companion book. 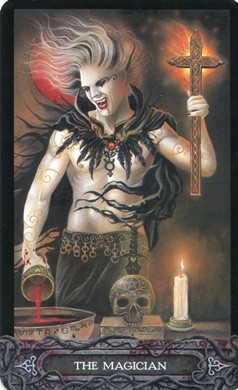 In fact, the Tarot of Vampyres may very well enchant those lacking interest in the vampire craze or so-called “dark” decks. I know this first-hand, because I’m now under its spell! Never expecting to be so enamored with a vampire deck, I find myself grabbing for these cards for most personal readings these days. It reads so clearly and honestly, and I admire its unusual, dynamic perspective on familiar archetypes.

Measuring approximately 4 ¾ x 2 ¾ inches, the cards of the Tarot of Vampyres feature a thin black border around the illustrations and an ornate stonework banner at the bottom. The Major Arcana lacks numbering and the Minor suits follow the designation of Knives (Swords), Scepters (Wands), Grails (Cups) and Skulls (Pentacles). The almost-but-not-quite reversible backings depict thorny, intertwined branches with a red rose in the middle, and the background looks to be blood-spattered stone (a grave marker, perhaps?).

It would be enough to own this lavish deck, but the Phantasmagoria book is (far) beyond most deck companions. You’ll not find fluff here, although Ian Daniels (who also wrote the book) possesses poetic prowess (say THAT three times fast!). Nor will you find a shallow understanding of Tarot and related metaphysical fields (as in many Llewellyn Tarot deck companion books—and you KNOW what I mean). 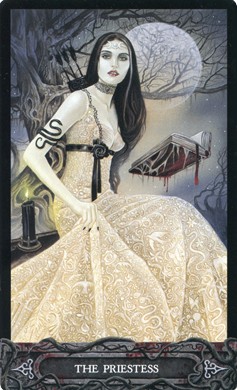 What IS remarkable about the Tarot of Vampyres companion is its intelligence, insight and perspective—on both Tarot AND esoteric wisdom. You’ll find solid Kabbalistic correlations and explanations in Phantasmagoria, as well as astrological and numerological considerations.

But what I find especially impressive about Phantasmagoria is the author’s spiritual and psychological understanding of the vampire mythos and how it relates to everyday life—including human longing, fears and responses. The way he correlates these profound insights with each Tarot card—weaving in numerological, Kabbalistic, astrological and Jungian considerations—truly an amazing treat.

Absorbing, profound, informative, illuminating—all these words apply to the companion book. What an incredible surprise for me! And the cards? Can bloody figures be beautiful? Can demonic creatures be beguiling? Can skulls be lovely, graveyards inviting and dead branches alluring? Can vampire cards be—dare I say it—spiritual? Yes!

If you cross hand-painted versions of Ciro Marchetti’s detailed digital art (especially fabric fringing and metal work) with Will Worthington’s sumptuous egg tempera pieces—and apply that to gothic creatures and landscapes—you’ll get an idea of the luscious illustrations in the Tarot of Vampyres. 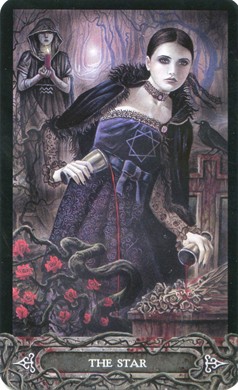 I have only two minor criticisms of this box set: firstly, the companion book does NOT contain grayscale replications of each card. If you’re like me and enjoy reading a companion book without having to lug around the actual cards (say, as your relaxing outside), then this is a bit of a pain (although Daniels does adequately describe most cards).

Also, I feel that such a fine box set deserved an ornate bag—or ANY bag, really. However, all we get is the plain white cardboard box to store the cards. Speaking of cards, make sure you check your set! Mine was missing the 9 of Scepters, but had two 10 of Scepters cards. After emailing Llewellyn Customer Service a super-friendly and competent gal named Jackie responded right back and I had a replacement card within a week (not to mention great recommends on Flux titles and some catalogues!).

Having said that, the Tarot of Vampyres blows away brethren decks like Bob Place’s Vampire Tarot (don’t like it) and the Bohemian Gothic Tarot (can’t compete with this set). However, I will say that I adore the art of the CGI Vampires Tarot of the Eternal Night just as well as the Tarot of Vampyres—or maybe a bit more so, because I feel that Davide Corsi’s deck displays a bit more variety than the Tarot of Vampyres (for example, older vampires, half-bat creatures, coffins and range of emotion).

If you’re into vampires, you must get the Tarot of Vampyres ASAP (if you already haven’t). The companion book is packed with card meanings, symbolism, spreads, alchemical correlations, personal card portraits and charts. Even if you’re not “into” vampires (I’m not), you may find this box set a special, unexpected treasure; at the very least, it would be great for Halloween readings or to have as an art deck!

To see 15 more images from this deck, click here.