Home JanetBoyer.com Chez Boyer Etsy Shop Subscribe Readings
Video Trailer of Back in Time Tarot
10/10/10 and the 10s of Tarot

Tarot of the Shamans

"The Tarot of the Shamans is conceived for those who are seeking greater awareness and harmony with themselves, with reality and with nature. The cards are intended for all modern-day Shamans lost in their contemporary present and wish to rediscover the path in the forest, to unveil their animal nature and reawaken their inner Shaman." - From the L(ittle) W(hite) B(ook)

Retracing the essence of the Shamanic experience, the Shaman Tarot melds ancient rites and symbols with the mechanisms of civilization, suggesting that our Existence (spirit) flows through both time and space.

A canoe sailing among skyscrapers, a modern man trapped in a crystal held by a native, jungle vines invading a modern apartment, a loincloth clad male soaring among gray aliens, a meditating elder surrounded by discarded tires, concrete blocks and appliances--these are some of the unusual images found in the Shaman Tarot. 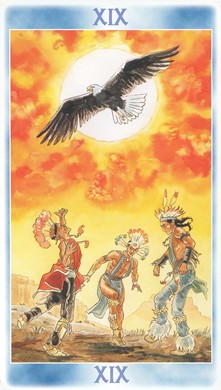 Correlating four central moments of both the shamanic experience and four Power Objects, the Minor Arcana suits of the Shaman Tarot are Drums (Earth--"Dance"), Bows (Air--"Voyage"), Bones (Fire--"Combat") and Stones (Water--"Healing"). These associations may prove quite confusing to Tarot enthusiasts, primarily because Drums, Bones and Stones have all been associated with the Earth element in other decks (one reason that I wouldn't recommend the Shaman Tarot for those new to the cards.)

Measuring approximately 4 ¾ x 2 ½ inches, the cards feature a reversible backing--a totem-pole in blue and lavender hues, surrounded by dragonflies and a mauve border--while the fronts are absent of titles. Instead, the Majors display Roman numerals at top and bottom; the Minors show suit symbol and number; and the court cards depict only court symbol and suit symbol.

Speaking of courts, the delineation of the court cards in the Shaman Tarot are Knave, Knight, Queen and King, symbolized by a single feather, a wooden horse, a necklace and a feathered crown. But get this: there is NO explanation in the LWB for these associations! Seasoned Tarotist could guess, but beginners would be doubly lost using this deck (which is another reason I couldn't recommend the Shaman Tarot for beginners), especially since the LWB descriptions of the cards rarely match the image (par for the course with Lo Scarabeo LWBs, unfortunately). 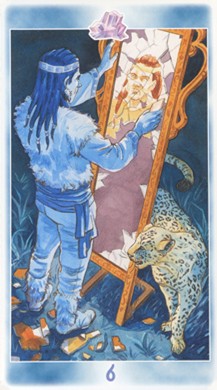 While figuring out which symbols go with what element, suit and court card takes some getting used to, the Shaman Tarot does offer fascinating insights into modern dilemmas, creative obstructions and spiritual questions. I've used this deck for several months now and find it to be deep and broad with its advice--and sometimes amusingly snarky!

Case in point: I was feeling especially wonderful one day, and did a one-card reading as an experiment (after all, who consults the cards when soaring high, right?)--just wondering if the Universe had a message for me (like why I was feeling so giddy!).

Guess what drew? Drum 7, a card depicting a woman dancing at water's edge, playing a tambourine with her eyes closed, lovely birds swooping around her--REVERSED. I "heard" in my spirit, "Why are you even asking about your elation? Just enjoy it!"

Too funny! I actually laughed aloud.

As with many Lo Scarabeo decks, the Shaman Tarot provides unusual perspectives for quandaries and questions, as well as for contemplation and meditation. If you're attracted to the art and find the subject matter intriguing, do give this deck a try; I think you'll be pleasantly rewarded for your study and use of this symbolic deck.

To see 15 more images from the Shaman Tarot, click here.