“The man whom legend calls Santa Claus was born simply Klaus. He was the first and only child of a skilled carpenter and his good wife, both of whom, I am sorry to say, died when the Black Death came to their village at the foot of Mount Feldberg in the Black Forest in 1343. Little Klaus, barely out of babyhood then, had no other family, and so he was adopted by the Worshipful Guild of Foresters, Carpenters, and Woodworkers.” – From The Christmas Chronicles

Have you ever wondered how peppermint became associated with Christmas, Klaus entered the toy business, or where he met Mrs. Klaus (called Anna in this book)…or how red and green became the “official” colors of the holiday? And what are elves, really? Do your children ask how “Santa” enters houses without chimneys or delivers packages all over the world in just one night? Why, it’s all found in The Green Book!

Offering a new holiday mythos in his book The Christmas Chronicles, author Tim Slover weaves a tale that begins with the narrator driving through snowy mountains, scouting for pine boughs to decorate the family home. Suddenly, a straight sheet of icy road materializes out of thin air, connecting the ground before him to a place high in the sky. A speeding sleigh drawn by a talking scarlet reindeer careens onto the glassy road, and out bounces The Green Book—a magical tome recounting the “true” history of Santa Claus.

I enjoyed the explanation of Klaus’ early years, and how he sought to alleviate the post-plague suffering of his fellow villagers with kindness, compassion, good humor and handcrafted gifts. Introducing a jealous fellow Guildsman named Rolf Eckhof was a clever way to provide a tangible enemy for Klaus, as well as an explanation for holiday despair. I also appreciated the subtle reference to the Holy Family, but especially the inclusion of other spiritual traditions and practices (for example, Paganism, Astrology and Buddhism). 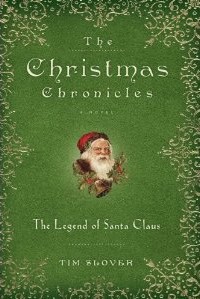 The first part of The Christmas Chronicles stitched together charming details of village life, toy construction and a grand entrance from a woman destined to become Mrs. Klaus (who knew Dasher was her faithful companion first?)  However, what should have been the most delightful part of the tale—how Klaus became a “saint”, the creation of Truth North and Castle Noel, the yearly deliveries—flagged a bit for me (despite some inventive explanations for common holiday questions like Christmas List Protocols).

What particularly disturbed me and shattered the “magic” (that, although losing its luster halfway through, was still there) was Anna’s obsession with stitching battle scenes on holiday accoutrements (such as the elves’ stockings)—including the Crusades. Worse, is the following passage from the book:

“About the subject of dangerous playthings, Anna grew quite excited. She instantly began planning a range of toys that would recreate in full working detail, but in children’s sizes, the armor and weapons of the Roman Ninth Legion. ‘Think what fun my children would have with their own real swords and shields!’ Anna exulted, her eyes glowing. ‘And we could make a line of working catapults…!” And then Klaus wondered aloud if parents would object to toys that might lead to loss of blood, and Anna declared indignantly that was all part of a happy childhood.”

Huh? These aren’t plastic weapons, mind you, but actual miniaturized weapons of war! Geez. It’s great that the author wants to (apparently) make Mrs. Klaus feisty and adventurous—but a lover of violence? Yuk.

Other than this glaring, unfortunate juxtaposition against holiday cheer, wintry sparkles, maple sugar cookies, generosity and forgiveness (yes, Mrs. Klaus is merciful, even to the point of forgiving her would-be killer), The Christmas Chronicles presents a fanciful re-imagining of the origins and practices of Santa Claus—and may even make a good movie in the right filmmaking hands. However, I think the book could have been better by expanding descriptions of what *must* be the stunning surroundings of Truth North, as well as a tweaking of Anna’s character…as well as a more realized narrator and family.