Four Elements in the Tarot 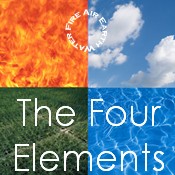 The four elements and their respective symbols, which are often on the table (or in the vicinity) of The Magician card, are the Cup (Water), the Wand (Fire), the Coin (Earth) and the Sword (Air).

The four elements are rich and fascinating exploration, especially since the Aces embody the elements and the Minor Arcana suits reflect how they play out in everyday life.

From my experience and perspective, the associations and issues connected with the four elements and suits are:

WATER - Cups, Chalices, Bowls, Hearts, Vessels or other receptacle for holding. It is considered feminine/passive in nature. Colors often used in Water cards are deep blues, aqua and, in some cases, gold (in terms of cup color and preciousness) and pink. WATER/CUPS connects with relationships, feelings, dreams, values, moods, the unconscious/subconscious, psychic phenomena, empathy, compassion, forgiveness and matters of the heart. Its energy is often slower in nature--steeping, stewing, and gently flowing. In ancient Tarot de Marseilles style decks, the CUPS suit was associated with the clergy. In the four-humor model, WATER is sanguine. In terms of Jungian function, WATER is Feeling and Introverted.

EARTH - Coins, Pentacles, Disks, Crystals, Diamonds or other round object. It is considered feminine/passive in nature. Colors often used in Earth cards are greens and browns, sometimes gold (in terms of money). EARTH/COINS connect with the physical realm, such as material possessions, money, job, health, land, food, home and environment. Its energy is usually quite slow—
cautious and methodical. In ancient Tarot de Marseilles style decks, COINS suit was associated with the merchant class. In the four-humor model, EARTH is phlegmatic. In terms of Jungian function, EARTH is Sensing and Introverted.

FIRE - Wands, Batons, Staffs, Sticks or Clubs, its phallic shape connects it with the masculine/active. Colors often used in Fire cards are red and orange, sometimes bright yellow. FIRE/WANDS connects with passion, energy, enthusiasm, courage, gumption, vocation, career (as opposed to actual job), and many issues related to the "self" (as in, "self starter", “self esteem”, "self propelled", "self possessed", etc.). Its energy is sudden and sometimes explosive. In ancient Tarot de Marseilles style decks, the WANDS suit was associated with the peasant class. In the four-humor model, FIRE is choleric. In terms of Jungian function, FIRE is iNtuition and Extroverted.

AIR - Swords, Blades, Arrows or Spades, its shape is also phallic, and thus masculine/active. Colors often used in Air cards are powder blue, gray, white and at times, yellow (especially pale yellow). AIR/SWORDS suit connects with the mental realm of thoughts, communication, decisions, beliefs, judgments, opinions and so on. Some people believe that thoughts cause suffering, not situations. Thus, the AIR/SWORDS suit is often attributed to arguments, hostility, anxiety and suffering. In ancient Tarot de Marseilles style decks, the SWORDS suit was associated with nobility. In the four-humor model, AIR is melancholic. In terms of Jungian function, AIR is Thinking and Extroverted.

Different authors sometimes associate various functions to the elements/suits, but these are the ones that make the most sense to me. And, you'll get a whole range of associations with seasons, too. For me, what makes the most sense is:

Of course, those are Northern Hemisphere associations.

How do you see the four elements correlating with the Tarot? How might my correlations--or yours or others--inform specific Tarot cards? I'd love to hear your thoughts!