Four of Swords Action Versus Inaction

As I was pondering the 4 of Swords from the book Tarot and the Tree of Life by Isabel Radow Kliegman, I considered her take on inaction. 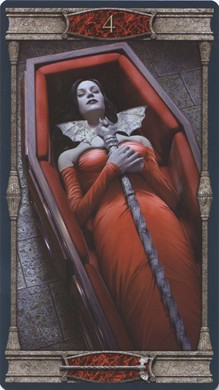 Here's what Kliegman writes about this card:

"There is another important aspect of the Four of Swords to which we may now direct our attention, and that is the difference between action and activity. If someone calls you and asks, 'What did you do today?' and you say you had a busy day, you probably don't mean that you spent it meditating. You probably mean 'I was running a lot of errands. I visited a sick friend, then I had to pick up the dry cleaning and drop a book off at the library before my doctor's appointment. Later I had a hairdresser's appointment, and then I had to bring some soup to my mother. And of course I always do my charity work on Tuesdays...' That's an action-packed day. It is also a passive day...Activity and action may be seen to be in the same dichotomous relationship as ego and soul: the ego can use activity to distract from the soul's purpose, but when the soul takes action, it may appear from the perspective of our ego that we're not doing anything. 'Oh, I just had a lazy day. I was reading and meditating.' Yet that is not a lazy day; it is just a quiet day. Although the Four of Swords is an image of inactivity, it is a card of taking action in our lives."

What are your thoughts about Kliegman's observations on the Four of Swords?

Personally, I'm a bit confused as to why Kliegman calls that action-packed day "passive".  She admits this card isn't about death, but about "withdrawal and rest", as Gina pointed out. And, Kliegman also observes that, since this is a four, it is stable and thus, lacking dynamism.

So I'm trying to figure out how, in her opinion, the Four of Swords can be both "restful" and "taking action". And how is "soul" action different from "physical" action?

I'd love to hear your thoughts!

Card image from the Vampires of the Eternal Night Tarot by Davide Corsi.