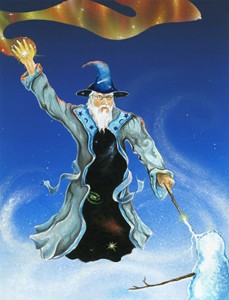 The Magician from the Snowland Deck
You’ve just put down yet another Harry Potter book, relishing the time spent among wizards, house elves and boggarts. Or maybe you’ve had the privilege of watching Criss Angel’s live show, BeLIEve, at the Luxor in Vegas, or reserve a front seat on your couch every week to watch his TV show Mindfreak. Alternatively, you may be a fan of the beloved Oz books by L. Frank Baum, or an avid devotee of the Wizard of Oz  starring Judy Garland.

Guess what? You’ve just spent time in the presence of the Magician archetype.

As a part of your spiritual path, devotion to Kwan Yin, Mary, Gaia, or other goddess energy may guide and comfort you. Or, perhaps you are called to nurture others and disseminate compassion to the world—or are drawn to others who live this example.

You are in the presence of the Empress, or Mother, archetype.

This is the realm of the Devil archetype, the energy of bondage.

An archetype is a template, a universal pattern recognized in virtually any epoch and in every culture. When I wrote “Magician”, “Mother” and “Devil”, an image of some sort immediately came to mind—whether via a movie, story, character or personal experience. 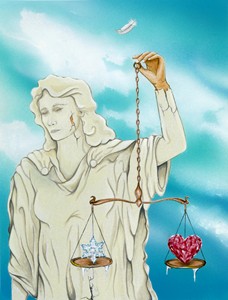 Justice from the Snowland Deck
If I were to convey “Lovers”, “Death”, or “Justice” to any person—whether through word, art, music or film—most, if not all, would have a point of reference to identify with these universal themes, regardless of age, social standing or country of origin.

This is the power of archetypes—to transcend the specific to the collective, from the individual to the world. And because archetypes are a common language, wisdom, meaning, feelings and teachings are conveyed through these “larger than life” molds—reinterpreted by writers, artists, and sages for fresh application. Still, no matter how many spokes on the proverbial wheel emanate from the stories among us, the hub remains the same: the universal realm of an archetype.

One extraordinary vehicle containing a myriad of these “wheels” is a picture book called the Tarot. Disguised as a pack of 78 cards, the Tarot contains universal stories that map and reflect the twists and turns, joys and sorrows, of life here on Earth. From the naiveté of The Fool, sometimes portrayed as the Puer/Puella Eternis (the Eternal Boy/Girl that never “grows up”) or the clown, to the World (often depicted as a globe or the Earth as seen from space), the first twenty-two cards of the Tarot are known as the Major Arcana, or “larger secrets”.

Some Tarotists contend that the twenty-two Major Arcana, also called Trumps, portrays universal archetypes while the forty Minor Arcana cards shows how these archetypes play out in everyday life via relationships or feelings (Water/Cups), communication or conflict (Air/Swords), drive or vocation (Fire/Wands) and the material world—money, health and physicality (Earth/Pentacles). The sixteen Court Cards of each of the four suits show how particular people and personalities affect and modify each. For example, the energy of the Knight of Swords (“racehorse”) is different from the Knight of Pentacles (“plow horse”).

For those who are unfamiliar with the Tarot, here is a list of the Major Arcana cards, as well as some familiar patterns reflected in their archetypes: 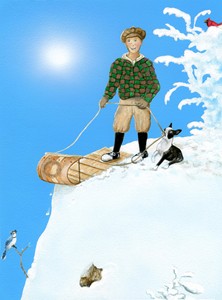 Of course, the fact that these are archetypes means that their manifestation and permutation in myth, art and life take myriad forms. For example, a variation of the Devil archetype would be Voldemort (“He Who Shall Not Be Named”) from the Harry Potter novels. It’s no coincidence that the parsel-tongued villain  is associated with Slytherin and represented by a snake; after all, in Christian mythos, a serpent embodied “the devil” when tempting Eve in the Garden of Eden story. 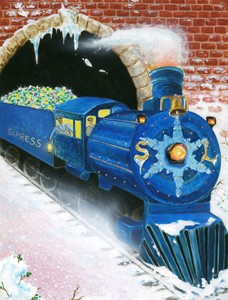 The Train (Chariot) from the Snowland Deck
From Ben Hur to Speed Racer, The Chariot—and the “need for speed”—is yet another archetype imbedded in our consciousness. The star-crossed Romeo and Juliet aptly portray The Lovers, while blind Lady Justice, King Solomon and Ma’at exemplify Justice.

Archetypes surround us, often appearing in our own relationship dynamics, emotional reactions and career choices. By becoming familiar with archetypal patterns, we can better understand the world, others and ourselves. Through this increased awareness, we can then take a “big picture” view of circumstances, inviting fresh perspectives, compassion and equanimity.

While many utilize the Tarot for divination or even fortunetelling—especially in terms of random selection—these mystical cards can also be used consciously for meditation, contemplation, problem solving, brainstorming, spiritual nourishment, journaling, dialogue, creative writing, inspiration, affirmation and manifestation.

When you immerse yourself in the realm of archetypes, your world will become richer--and the Tarot remains one of the most reliable (not to mention portable!) tour guides around.

Card images from the Snowland Deck