The Chariot - Individuation and Ambition

When I see the number 7, including Trump VII The Chariot and the Minor Arcana 7’s, I think of options, variety, choices, strategy, evaluation, imagination, exploration and experimentation. In addition, I see the 7’s as possessing a “lone wolf” energy and Life Path numerology bears this out. Interestingly, The Chariot and all the Minor 7’s in the Universal Waite Tarot deck feature a solitary figure.

Yet, The Chariot card isn’t called “The Charioteer”, which leaves us wondering: what, exactly, does this vehicle represent? And what are those two sphinxes sitting in front of the stone chariot in the Universal Waite Tarot? In the Sharman-Caselli deck, The Chariot shows two high-spirited horses—one black and the other white—pulling the rider in opposite directions.

One could speculate endlessly about what those two creatures could represent, but one thing is for certain: the charioteer isn’t going ANYWHERE in that buggy unless those two cooperate (unless, of course, the charioteer prefers to walk)! 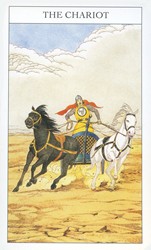 According to Carl Jung, when a person becomes aware of how their personal consciousness (the sum of their experiences) integrates with the collective unconscious (the universal archetypal realm common to all), a state of individuation—or wholeness of self—can be achieved.

In her book Jung and Tarot, author Sallie Nichols makes an interesting observation:

“…as a person gains the independence to be a nonconformist, he also gains the self-assurance to be a conformist. As Jung has often stressed, an individuated person is not the same as someone who is individualistic. He is not driven to conform to custom, but he is equally not driven to defy it. ”

Individuation is a seeker’s process, and often a painful one. Before we can obtain this state on the hero’s journey, though, each of us must go out into the world and “find ourselves”. That is, by experimentation, exploration and choosing (the numerological traits of the number 7), we discover our personal values and preferences. Eventually we realize (perhaps only unconsciously) that when we live out of alignment with our core values, we feel off kilter—much like a careening charioteer.

At the same time, we one day realize (sometimes to our utter chagrin, particularly if we happen to be one of those lone wolves!) that we are not islands. Philip and Stephanie Carr-Gomm note of The Chariot (from the DruidCraft Tarot companion book):

“The Chariot suggests the control needed to develop the personality and to master difficulties and circumstances…the personality has been forged to work well in the world, and progress can be made.”

So while we balance the fluctuating states of our personality within us, we must, at the same time, deal with external distractions and demands. Sure, we can thumb our nose at society—but at what expense to our personal growth? Alternatively, we can cave in to the expectations of family and culture—but then how would we come to know (and shine) the unique expression of our soul?

Ah—this is but one dilemma presented to us by The Chariot. Other issues arising from this card include achievement, single-minded determination, will, focus, speed and force. One question that The Chariot asks of us is “Does the end justify the means?” I’m reminded of the bumper sticker that reads “He who dies with the most toys still dies” (a wry take on the popular phrase “He who dies with the most toys wins.”)

To be sure, The Chariot can run roughshod over people to get what it wants. Some push their bodies to the limit (and then some), while others might trample anyone that gets in the way of a particular goal. And, ironically, this rigidity limits options rather than opens them. 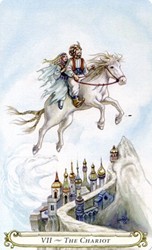 But is there anything wrong with ambition in itself? I don’t think so. After all, Mother Teresa surely had ambition to help the poor, relieve suffering and offer compassion.

There can be balance with both tension and paradox; in fact, the charioteer is probably safer with two horses trying to pull in separate directions than if they’d both make a hard right into a ditch!

Hard force and steel will can be beneficial when we’re training for a race, for example. And most women who have had natural childbirth (that’s right, no painkillers!) will tell you that pushing, straining and struggling are a part of the birthing process.

Succeeding doesn’t mean that someone else must fail.  In fact, I feel that a scarcity mindset pervades our culture where many believe that there isn’t enough to go around, and that if someone else “wins”, they must “lose” or vice versa. Authenticity and creativity can fuel forward movement without the need to disempower others. We can shine brightly without trying to snuff out the light of others…or to attempt to “prove” our strength or worthiness by denigrating someone else. Likewise, the victories of others in no way have to diminish ours.

So as you’re traveling down life’s road in The Chariot of your psyche, consider that you can strive for a win-win situation for all involved—and that an enduring sense of self isn’t dependent upon the approval, nor the rejection, of anyone.