One of the fun things you can do with Tarot is use the cards for entertainment purposes, such as making predictions about award shows, TV competitions and sports contests.

Because my beloved Sixburgh Steelers are knocking on seven's door, I thought I'd pull out the cards and make a prediction. Feel free to play along and pull your own cards, posting what you drew, your predictions and your reasons why. (FYI, I'm using the Bright Idea Deck by Mark McElroy).

I am pained to predict that, if the cards are right, the Green Bay Packers will win Superbowl XLV...and here's why: 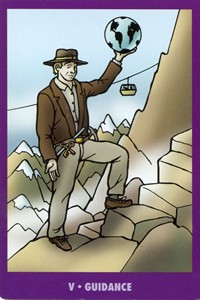 This card is equivalent to The Hierophant card in the Tarot. Right away, I notice that the figure in this card is literally "holding the world". It's not a trophy, but it may as well be! He's climbing high into the mountains, but notice that the figure is actually taking a very safe route, because there are actual steps carved into the mountainside! In fact, if you look closely, V Guidance actually implies three ways to get up the mountain: the wire lift, "roughing it" via hiking, or taking the stairs.

Stairs are incremental, well-used and crafted by human hands. This suggests that Green Bay will use tried-and-true methods to make progress in the game, and will steadily score throughout. Green Bay may get some opposition later in the game, but I think it will come from weather conditions (snow? ice? sleet?) more than the Steelers themselves. (Holy cow, I thought that prediction a bit "out there" since Superbowl XLV is being held in Dallas, Texas--and I didn't realize they get snow OR ice there. Imagine my surprise when I Googled "Superbowl Weather" and came to this link).

In Tarot, The Hierophant (the equivalent of V Guidance) usually indicates a strong mentor and tradition, which is yet another reason I feel that Green Bay will be relying on their coaches' guidance, as well as tried-and-true methods that have worked for them this seasons (especially offense).

Now, for the Sixburgh Steelers, I drew... 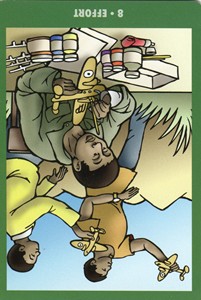 Equivalent to the 8 of Coins card in the Tarot, this card came up reversed. Some Tarot readers don't read reversals, but I do. (In fact, my second Tarot book will be all about those upside down cards). Anyway, right-side up, this is the "blue collar" card, one suggesting hard work and mastery. In the Bright Idea Deck, it's retitled 8 Effort. It shows three men working diligently on crafting and creating model planes.

So what does it mean that this card came up reversed? Well, I think this card indicates that some players won't be pulling their weight or playing as hoped. In fact, I think we may see some fumbles and mixed signals from the Steelers. Big Ben make take some big, unnecessary risks which will backfire via interceptions...making way for Green Bay's steady, incremental progress.  I also expect Sixburgh to make some "silly" mistakes...some that we may have seen before when the pressure is on.

Although I'm very sad to predict this, the cards seem to suggest that Green Bay will indeed beat the Steelers. But how badly? I'm not very good with numbers and don't follow sports--but I'll take a shot at prediction: I think Green Bay will make it into the 20s--22 or 25 or 27?--while Steelers will be lucky to make it out of the single digits (11 max).

So what do YOU say sports fans? Even if you  know nothing about Tarot but just want to talk about Superbowl XLV, we'd love to hear your comments here at the Tarot Gals Blog!

And fellow Tarot readers and enthusiasts...pull out your favorite deck, draw some cards, and tell us what you predict and why. It will be fascinating to compare notes!