“Tarot is a powerful tool for gaining access to deeper layers of the subconscious, and to learn from the immense knowledge of the collective conscience [sic]. The Sun and the Moon Tarot considers universal archetypes and cultural symbols, and also incorporates the artist’s own personal symbols.” – Vanessa Decort, creator of the Sun and Moon Tarot

Like the Universe itself, much of the card imagery from the Sun and Moon Tarot depicts “empty space”. But “empty” doesn’t mean without beauty, especially within this deck.

In fact, in those cards where 75% of the image is softly hued blankness, this artistic choice serves as a focal point—a visual rest stop before the eyes drop down to the “meat” of the Tarot image. 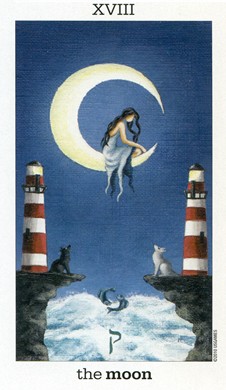 That “meat”, while not bulky, consists of minimalist depictions of animals, insects, suit symbols and motifs that often illustrate the bottom quarter of the card. Along with the faceless people dotting this Tarot landscape, the spare details are nevertheless telling.

Measuring approximately 4 ¾ x 2 ¾ inches, the cards of the Sun and Moon Tarot feature white borders on the front, with a reversible black-and-white lotus symbol on back. Various alchemical symbols and Hebrew letters are painted within the imagery (Minors and Majors respectively), with the Courts following the Princess, Prince, Queen and King designation.

The playful illustrations are almost childlike, with the canvas showing through in many of the card images. Some people may not like that aspect, but I think it adds an underlying softness to the depictions. Another detail that some may find off-putting is the inclusion of keywords on the Twos through the Tens. (I’ve always found them limiting, no matter what the deck.) 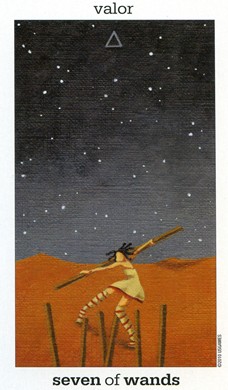 Replete with astrological, mythological, Kabbalistic, alchemical and archetypal considerations, the Little White Book provides more depth than the typical LWB, but it’s not geared to those new to Tarot, so actual interpretations and practical applications of the cards are pretty much nonexistent.

Intermittently, I’ve used the Sun and Moon Tarot for months now, and while I don’t find it a chatty deck, it does deliver a clean, concise and accurate message. However, if you want an actual “conversation”, you may need to draw three or more cards!

Unusual and refreshing, the Sun and Moon Tarot will appeal to enthusiasts who appreciate uncluttered, low-key, straightforward decks. Its non-scary illustrations would also serve children well, not to mention the client or Tarot newbie who gets spooked by some of the traditional Tarot imagery.

(Note: It has one of the best Death cards EVER!)

To see 18 additional images from the Sun and Moon Tarot, click here.

I have to say I really like this deck. Yes it is a little sparse, but the fact that it is not cluttered really allows it to speak the message clearly. And it's not as daunting as the Crowley deck, I find it easy to shuffle and work with.

That's what I found to be true, too. Thanks for stopping by to share your experience with the Sun and Moon Tarot!