What's in the Tower? 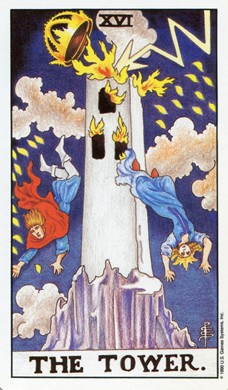 Pondering my Tarot birth cards of The Chariot and The Tower, I wondered: “What’s in the Tower?”

Immediately, an answer sprang forth in my head.

Before I get to that, though, let’s explore what’s NOT in The Tower.

Crusty, worn, outmoded beliefs that no longer serve us are not inside The Tower. No, that would be the brick and mortar that makes up the fortress.

And no, it’s not the façade of wholeness, integrity or permanence, because that’s the scaffolding of The Tower. In fact, in The Pictorial Key to the Tarot, Arthur Edward Waite called the Tower “The House of Falsehood” (stemming from the scripture “Except the Lord build the house, they labor in vain to build it”). In this light, The Tower’s structure could be connected to the Tower of Babel.

So when the lightning bolt strikes The Tower—whether you consider that a zap from God, a wake-up call from the Universe, an “aha moment” or a summoning of energy via The Magician—and the lid (crown) flies off…what’s inside? 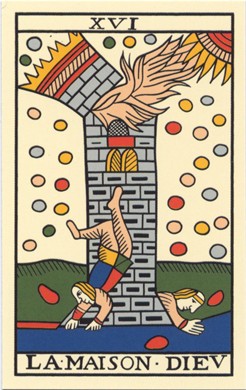 They’ve either bolted in fear from the noise or light, or because the sudden explosion of energy throws them from their encasement, suggesting that the plummeting figures represent arrogance or egotism. Some have correlated the two falling people with Adam and Eve’s banishment out of Eden.

So what’s inside The Tower? Well, the answer that immediately came to my mind was, of all things, the Ace of Cups!

This made sense to me, because one of the earlier names for The Tower was La Maison Dieu, or House of God. But like many “houses of God”, institutions set up by man, this structure is enclosed—which, unfortunately, often results in the energetic and spiritual parallel of “closing out” undesirables or “keeping in” the “special” or “pure”.

In many renderings, especially Rider-Waite-Smith variations, The Tower stands on high, removed from the landscape, suggesting isolation and the sense of being separate.

But take a look at the earlier versions of the Ace of Cups! There, too, is a structure right on top of the chalice! But unlike the fortressed Tower, this structure is an open temple—quite the opposite, wouldn’t you say? 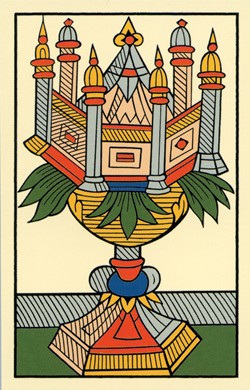 When a temple is “open”, all may come and go freely…exchanging ideas, love, camaraderie and possessions. There are no “citizens” versus “outsiders”, “holy” versus “unclean”, “members” versus “non-members”, “accepted” versus “rejected”.

No, all are welcome in the Ace of Cups! Ego has no place, and all are seen as brothers and sisters, equals. In the book The Way of Tarot, Alejandro Jodorowsky writes this about the open temple on the Ace of Cups: “This humble and vast sentiment of giving supports the body of the cathedral. All human wisdom is based on love. As Walt Whitman put it so well” ‘And whoever walks a furlong without sympathy walks to his own funeral dressed in his shroud.’”

Does The Tower experience hurt? Oh yeah, it certainly can. And the best explanation of WHY it almost always hurts can be found in the section on The Tower in the book Meditations on the Tarot, specifically a quoted portion of Dark Night of the Soul by St. John of the Cross:

“The dark night is a certain inflowing of God into the soul which cleanses it of its ignorances and imperfections, habitual, natural and spiritual…The soul, by reason of its impurity, suffers exceedingly when the divine light really shines upon it. And when the rays of this pure light strike upon the soul, in order to expel its impurities, the soul perceives itself to be so unclean and miserable that it seems as if God has set Himself against it, and itself were set against God.” 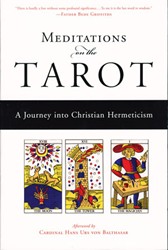 School of Humility! Isn’t that the truth? You can’t be touched by a true Tower experience and NOT become humble in its wake (otherwise, you haven’t experienced The Tower, you’ve merely experienced the juggernaut of The Wheel).

The Ace of Cups, for me, is a card of spiritual solace, Divine connection, and intuitive contemplation. It’s a “well that never runs dry”, nourishing the soul by drinking from Spirit. It’s beholding our “face before we were born” in the glassy mirror of its still waters. It’s Being and Knowing. It’s All That Is, in a teacup. The Whole, in a bowl. Infinity, in a droplet. 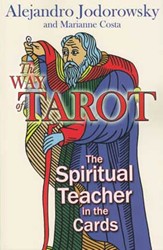 But in order to truly experience the Ace of Cups at this depth, I suspect that one must pass through a Tower experience first.

Consider this additional insight on the Ace of Cups from The Way of Tarot: “The mind has crossed through suffering, and there it is vanishing in the white light that surrounds the cup like a purified atmosphere. This cup, this temple that is so full, has value only if it pours itself into the world. At the base of love is the desire to give away everything that it has collected.”

And so, dear readers, I offer you my perceptions of what lies within The Tower…and within our very Being.

Images: The Tower from the Universal Waite Tarot published by U.S. Games Systems, Inc.; The Tower and the Ace of Cups from the Jean Noblet Tarot by Jean-Claude Flornoy.