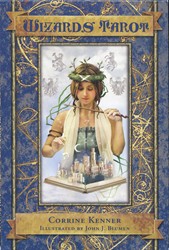 “Welcome to Mandrake Academy—where you are the student, and tarot is the teacher. Sit down, unwrap the cards, and you’ll discover a whole new world of magic and mystery. Mandrake Academy is an old-fashioned school, nestled in a rolling wooded plain. Here, where the four seasons move gently and distinctly through their cycles, modern professors train a new generation in the ancient arts of witchcraft and wizardry.” – From the companion book to the Wizards Tarot by Corrine Kenner

Several years ago, an online buzz swept the Tarotsphere: A Harry Potter-esque deck, set in a school much like Hogwarts, was under production. Created by Corrine Kenner and illustrated by John Blumen, early Major Arcana images of this deck, called the Wizards Tarot, were placed upon a special website dedicated to this special academy.

I couldn’t wait to know more, to see more! To get this deck in hand! 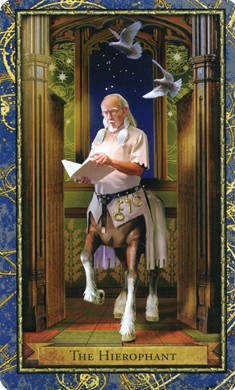 Being a fan of the Harry Potter books (which were still in progress at the time the Wizards Tarot was announced) I was stoked: A Tarot realm akin to J.K. Rowling’s magical world? A Mandrake Academy populated with seers like Sybill Trelawney, potion masters like Severus Snape and instructors like Firenze the centaur? Count me in!

You’ll find those kind of knock-offs in the Wizards Tarot, to be sure, but, unfortunately, the Wizards Tarot doesn’t dazzle, reveal or present anything special. As soon as this deck and book set was available for order, I plunked down my money at Amazon, but now that I’ve had it in my hands, buyer’s remorse gnaws at my stomach.

Here are but a few things that bother me about with this book and deck set:

• Other than the Five of Wands showing five arms, wands extended, towards a conjured fire and a student asleep on a bench in the Four of Swords (and the kids in the Four of Wands getting ready for a hoe-down) there is nothing fresh in the Minors. Most images are essentially a poorly replicated Rider-Waite imitation—right down to the student in the Four of Pentacles sitting in a chair with a huge coin on his head, in his arms and under his feet.

• The Minor Arcana figures look static and staged. There’s no sense of movement in most of the cards. The Six of Swords, for example, show two bored “students” sitting in a boat on calm water.

• It appears there were only a few models used for this deck, especially the Minors, so there’s a drab sense of sameness with the cards...students wearing the same bland, blank look on their faces. 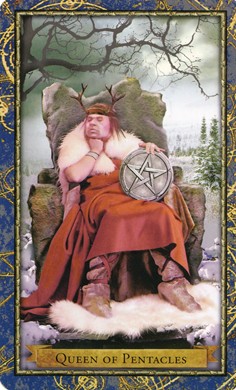 • The poor Pentacles suit gets the royal shaft with their Court Cards, each “gnome” looking like dull-witted, grumpy, fat and lazy oafs. Can you imagine a person with an Earth Sun sign identifying with those images? The Courts give us an opportunity to see ways of doing and being, approaches that may, or may not, be working for us…and need modified, changed, or emboldened. But the expressionless salamander creatures of the Wands Court, the “let’s bring back the 80s hair!” Cups Court, and the constipated looking Swords Court? Yikes! And doesn’t anyone smile in this deck?!

• Some of the Major Arcana cards are neat, like the old man standing in front of rows of books for The Hermit card (tons of books always look good!). I love The Hanged Man who has an upside-down version of the card on his wall. The Runic stained-glass windows and the one-eyed professor, an obvious nod to Odin, is brilliant. Death is re-named Transfiguration, and a figure begins to morph into a moth, which is very cool. However, the heavy-handed placement of Hebrew letters and astrological symbols often distracts from the image (case in point, the huge curtain tie emblazoned with Tzaddi in The Emperor card).

• The updated “Samantha on a broom” ala Bewitched looks pretty as The Chariot, but there’s no sense of the determination, will and power of this archetype; in fact, the blonde ingénue atop the broomstick looks scared, unsure and lost. And The Sun? There is no playfulness in this card, nor the vibrancy or virility of masculine energy. What you have is yet another bored-looking figure, staring at a metallic wheel with blooming sunflowers towering behind him and a white horse outside the window.

• The borders are too busy, but since there’s not much too look at in most of the cards (Minors and Courts), I guess that’s a moot point. 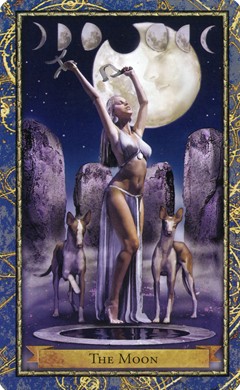 The Wizards Tarot may have worked pre-2004, before the dawn of Ciro Marchetti’s best-selling debut of the CGI Gilded Tarot and during Harry Potter madness, but in 2011, the deck feels dated. The imagery feels sterile, staged and devoid of emotion. Hardly anyone smiles, and the range of most of the expression goes from sleepy to apathetic.

The 239-page companion book contains a lot of great information connected to the Major Arcana—explanation of the Runes, interesting spreads, a crash course in astrology, charts of Greek and Roman pantheons, Court Card decans and so on. But most of the card explanation, especially the Minors and Courts (which have very little written about them compared to the Majors), are merely bullet points describing every color, detail and symbol and what each card should, and does, mean.

Which begs the question: To whom, exactly, is the Wizards Tarot geared? If newbies, as the introduction suggests, then the assault of esoteric information will overwhelm, and likely discourage, a beginner. The Tarot is an already-difficult system of study if you take esoterica and symbolism into account, without adding all the extras that a Tarot reader doesn’t need to understand (or use) the cards effectively out of the gate. 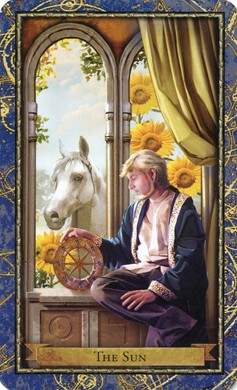 So, then, is the Wizards Tarot for intermediate or advanced users? Well, I don’t know about you, but I don’t think the market needs another Rider-Waite replica…especially one that’s so down-to-the-details faithful to the original poses with the Minors, yet staged like mannequins on display (and, of course, devoid of Pixie’s artistic talent for rendering a wide-range of human emotion).

Most readers and practitioners falling into the intermediate and advanced categories already know that Jupiter means “luck growth and expansion” and that Justice’s imagery is associated with Ma’at, the goddess who weighed men’s heart against a feather.and that the Four of Swords can mean rest and recuperation.

If you have Kenner’s latest offerings (Tarot for Writers and the largely re-hashed version of that book in the form of Simple Fortunetelling with Tarot Cards), then you’ve already read her litany of regurgitated, common associations…which is largely found in the companion book to the Wizards Tarot.

While you may enjoy looking at most of the Major Arcana cards, the imagery breaks down at the Minors and Court Cards. Had the Minors had more of a sense of “story”—and the Courts more approachability—this deck might have worked. If you’re not familiar with Kenner’s last two books and you’d like to bolster your Tarot knowledge with Runes, mythology, astrology, numerology and the like, you’ll get great tidbits (and spreads) in this book.

But if you’re a beginner, you’ll likely be overwhelmed by the book, and if you’re a seasoned Tarotist, you may wonder how such a static RWS clone made it to the market.  (And the box? This flimsy container came unglued right after opening it, after minimal handling!)

Note: if you desire a gorgeous CGI Rider-Waite clone, try the Pictorial Key Tarot by Davide Corsi instead.

To see 16 more images from the Wizards Tarot, click here.