About Janet and Ron Boyer 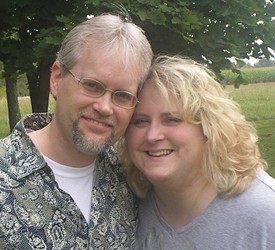 We're the creators of the Snowland Tarot--Janet and Ron Boyer. Loving all things wintry, I (Janet) decided to expand beyond our deck to create a blog dedicated to snow and ice--including weather, snowmen, landscapes, art, myth, poems, science and more. Here's a bit more about us:

Janet Boyer is the author of Back in Time Tarot (Hampton Roads, 2008) and Tarot in Reverse (Schiffer, 2012), as well as the co-creator of the Snowland Tarot (Schiffer, 2013). As a respected Amazon Top/Vine Reviewer, she’s penned over 1,000 published reviews that have also been featured in magazines and other online outlets. In April 2011, Janet was included in the Domino Project's book Tales of the Revolution edited by Seth Godin, which highlighted people making a difference in the world as Initiators. In addition to being a Tarot expert and professional reader, Janet is also a social media consultant, blogger and homeschooling Mom. A true Renaissance Soul, she describes herself with four I’s: Innovator, Iconoclast, Initiator and Instigator. Janet makes her home in the beautiful state of Pennsylvania with her soulmate, Ron, their son, Noah, and two fur babies (cats Stewart and Neo). You can visit Janet online and find out all about her and her latest exploits at http://JanetBoyer.com 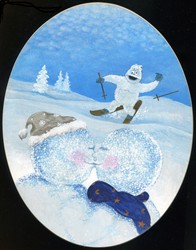 Creating since the age of 5, Ron Boyer is a self-taught artist from Pennsylvania, working in acrylics, woodburn, watercolor pencils and polymer clay. At age 21, he was commissioned to create a mural based on the movie Dances With Wolves. Painted in the dead of winter on a 2-car garage door--and taking 7 months to complete--this mural featured dozens of buffalo, horses, and Native American hunters, earning him a full-page story in the local paper. Although Ron specialized in photo-realistic wildlife for most of his life, he has since branched out to mystical, whimsical and surrealistic themes. He has created dozens of commissioned pieces over the last 20 years. Currently, he's working on the Snowland Tarot with his wife, Janet. From scratch, Ron can also make a mean pie (peach with blueberries!) and out-of-this world White Chocolate Banana Cake...not to mention bookcases, entertainment centers, DVD cases, cabinents and sundry practical inventions. You can see some of his art here.