I've produced yet another eBook called Tarot Court Cards Revealed and this one has two free goodies attached to the deal (including a 2-hour mp3 live class). Read on, my faithful readers... 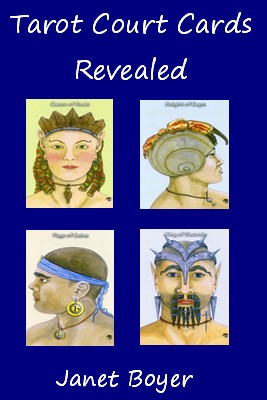 Arguably, the most difficult cards of the Tarot to understand, interpret and apply in a reading are the sixteen Court Cards (most commonly named Page, Knight, Queen and King). The good news is that I have created an easy-to-use system that will not only help you remember the approaches of these "people cards", but also create your own fresh, accurate interpretations for each one.

The first thing you need to do, though, is to discard the whole notion of gender with the Court Cards. Each of the Court Cards is an approach to a situation, relationship or life itself, which includes strengths and drawbacks. In a Tarot reading, it is possible that a Court Card can refer to an actual person that resembles the image on the card or reflects the gender.

However, my approach to understanding the Tarot Court Cards is dynamic, modern and relevant. Thus, hair, eye and skin color won't be considerations in this eBook.

Instead, I'll show you a fool-proof system for quickly, and accurately, interpreting a Tarot Court Card when it comes up in a reading with my exciting, accessible keyword approach in Tarot Court Cards Revealed. Best of all? No Tarot deck necessary!

When you order this eBook, you get four FREE worksheets plus a 2-hour audio class on the Court Cards...simply by following the instructions in Tarot Court Cards Revealed.

To order Tarot Court Cards Revealed for Kindle, click here. To order directly from me in case you don't have a Kindle (it will be sent to you via email), click here.

Court cards on the cover illustration are from the Hezicos Tarot by Mary Griffin, used by permission. To get your copy of this beautiful, innovative deck, visit HezicosTarot.com