"Get comfortable and relax. This will not take very long at all, I promise. For one very simple reason. If you are reading this then you are more than likely a 'cat person' or a pagan, or even both! Therefore, there is little need for explanation, for this deck is as simple as it is delightful. But make no mistake! Simple does not always mean stupid or shallow or useless. Even thought [sic] I wanted a lighthearted and delightful deck, I also insisted that it be practical and easy to use for readings." - Magdelina Messina (pseudonym for Barbara Moore)

From white Persians to black shorthairs, orange tabbies to the "hairless" Sphynx, the Tarot of Pagan Cats shows these common, yet often enigmatic, fur friends in all their glory.

Inquisitive, playful, fierce, sleepy, indifferent, affectionate--just like the range of emotion and states reflected in traditional Tarot cards, the cats in this deck also portray the joys, sorrows, triumphs and hardships that beset humans. 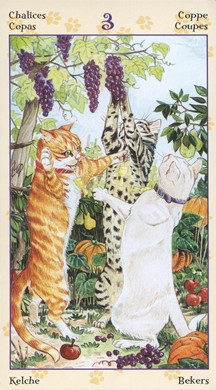 Placed among a variety of settings--both indoor and out--with feline coats illustrated in a variety of colors, the Tarot of Pagan Cats is largely modeled after the Rider-Waite style decks, but with enough whimsy and inventive depictions to feel fresh and offer surprises.

For example, a fearless calico leaps sideways from the top of drapes, ready to pounce on the unsuspecting mouse below--and we get to see him right at the beginning of his long jump. On the kaleidoscopic Temperance card, a compassionate, collared white cat pours a goldfish out of a confining glass bowl, into an impressionistic stream reflecting the rainbow above.

In the Six of Wands, a wild-eyed, leaf-crowned cat leaps upon a rat while more than a dozen cats look on--cleverly suggesting that for every "winner" there is a "loser"...and that "winning" may be as much a rite of passage or requirement for group respect as it is the result of personal ambition.

Measuring approximately 4 ¾ x 2 ½ inches and framed with an adorable cream paw print border, the Tarot of Pagan Cats follows RWS Major Arcana names. The suits are Chalices, Pentacles, Swords and Wands, with the Knaves, Knights, Queens and Kings Court designation (although the LWB calls the Knaves "Pages"). The LWB offers basic upright and reversed card interpretations, but Barbara Moore does a great job with the meanings. 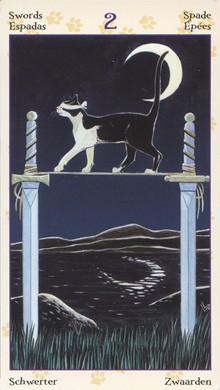 Over the last month, I've used the Tarot of Pagan Cats for several important readings and each time, they've been spot on (departing from my usual use for the cards, I used this deck twice for personal prediction on a business matter and each time, the one-card reading literally "spoke" an answer that turned out to be 100% correct). I've also used it for client readings and relationship matters (one, highly charged emotionally) and, again, both times the messages were clear and correct (and the latter, extremely comforting and insightful).

So even if you don't consider yourself a "cat person" you may very well find that this deck has a lot to say in a reading or for contemplation. I love cats (well, all animals, really) and happen to own two fur-babies, so I'm more than comfortable with the Tarot of Pagan Cats imagery. And I'm not a Pagan, either, so don't let the title of this deck discourage you (as far as I can see, the "pagan" part is mostly the strategic use of elemental glyphs and symbols, which most Tarot users are familiar with anyway).

The Devil card is a bit creepy with its strange hybrid cat/rabbit creatures (WHAT is that green thing in one of the cats' mouth?), and there are a few cards that show the predatory nature of felines and terrified cats, so I'm not sure if this is a 100% kid-safe deck. However, the Tarot of Pagan Cats would make a wonderful deck for youth 12 and up, as well as adults that are looking to add a cute, yet dependable, RWS-style deck to their toolkit. 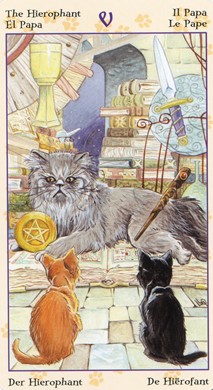 One of my favorite cards is the 7 of Chalices: a sleeping gray tabby dreams of seven golden goblets, filled with a white cat, a mouse, catnip, a bowl of cream, a goldfish, a ball of yarn and a comfy cushion. Too sweet! But yet, look at the truth in that card: does he follow his instinct to kill, or does he chase a beguiling cat, indulge, eat, play or just sleep? We have similar dilemmas as humans (on a grander scale, of course!).

I keep the Tarot of Pagan Cats close by--I find myself reaching for this deck the most these days--and it's become a staple in my personal and client readings. Recommended!