If The Wheel of Fortune is the process of sowing and reaping—the boomerang cause of Karma—then Judgment is the effect: the result of our thoughts, actions and choices.

This "Judgment" may resemble “eating crow”, “comeuppance”, “called on the carpet” or “just desserts”. In fact, the lightning bolt of The Tower seems to be the Universe’s favorite tool of choice for getting its foot in the door to crack open our denseness, but the actual realization that there’s a barrier or external crust is the Judgment experience.

There’s often a trumpet shown on Rider-Waite style images of the Judgment card, alluding to some kind of “call”. Of course, some die-hard Christians would interpret this image as a “call to judgment” or a time of reckoning after physical death—where the good/bad, saved/unsaved are all sorted out at the pearly gates.

Others may interpret the image as a rising of the Spirit while yet alive—being “caught up in the air”, shedding the physical form much like a snake sheds its skin—an actual “rapture” to heaven.

For the more symbolically minded, the Judgment card could be interpreted as a “call to come up hither”—to adjust focus from the temporal to the spiritual, the mundane to the sublime, the everything to the nothing. The rapturous poetry of Rumi comes to mind, or some forms of meditation.

But the concept of duality resides in all those interpretations. There is an “up” and a “down”, a “holy” and a “profane”, a “sacred” and a “mundane”, a “noisy” and “quiet”.

Even when taking a more mystical view, Judgment can be renamed “Awakening”, but that also is part of a dualistic mindset; in this case, “awake” or “asleep”.

But “asleep” to what? “Awake” to what? Oftentimes, dualistic language serves as yet another barrier of “us vs. them” or “me vs. you” (which really comes down to “those I like” and “those I don’t”).

Yet, we’ve incarnated on this dualistic Earth for a reason: we cannot recognize our Light, our beauty, or innate sacredness without having a context for “otherness”. That “otherness” serves as contrast so we can truly behold what we are at core. In this sense, what we project outwardly (whether positive or negative) can serve as a mirror.

Here’s an example of what I mean:

Let’s say you walk into the bathroom to brush your teeth. Midway through brushing, you look in the mirror and notice that you’ve gotten toothpaste on your nose.

Instead of wiping your face, though, you wipe the mirror. “Why isn’t that toothpaste coming off?” you wonder. Well, that’s because you haven’t touched the source…just the reflection.

This analogy holds true for how we see situations and others, too. That’s what Jung meant by “shadow”: it’s something external that is cast from the original object. In the case of idolization or admiration, this would be a “positive shadow”. In the case of demonizing, this would be a “negative shadow”. Either way, some type of behavior or state isn’t being recognized…let alone claimed. 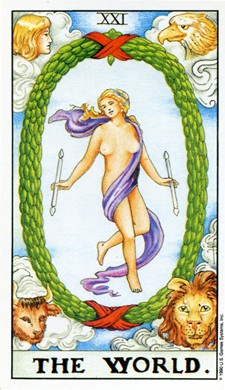 And you can’t integrate what you don’t see, let alone what you won’t claim in yourself.

This is the place between Judgment and before The World: the space where duality gives up its last breath, and oneness is realized, embraced and lived.

Another take on the Judgment card is “hearing a call”. This could be in the form of feeling a pull to service, changing paths or pursuing a dream. In fact, my path to Tarot was a “call”: the way my husband tells it, I was sitting at the dining room table one day and blurted out “I feel to learn Tarot”.

So not all calls are juggernaut Wheels or sizzling lightning. Sometimes, a call arrives not on a bugle blast, but a whisper. It’s the “still small voice” reminding you of something—or encouraging you to stretch your wings and fly to greater heights or different lands. “Greater” not as in “better than others”—there doesn’t have to be duality in heeding a call—but rather, extending to your full measure of capability here on the Earth. Not necessarily better, but different.

Lastly, Karma isn’t Judgment in the strictest sense. There is no partiality or moral pronouncement in its wake. Rather, it’s merely cause and effect—Newton’s 3rd Law of Motion. This is why I see The Wheel of Fortune as the “law” of Karma—the process. 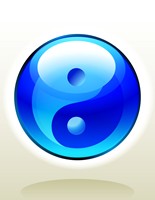 After all, Einstein once noted: “Insanity: doing the same thing over and over again and expecting different results.” Same way with running into the same scenarios or same “types” of people: if you spot it, hon, you got it. It’s not the mirror…it’s you.

So the good news is that there will be no rapture nor will there be a final “Judgment”; the bad news is that whether you want to keep beating your head against the wall is strictly up to you…

But it is possible to get past either/or and just embrace “both”…realizing that duality itself can be swallowed up into Yin/Yang symbol—not a coin with two sides, but a sphere where there are no sides.