My God, It's Full of Stars! 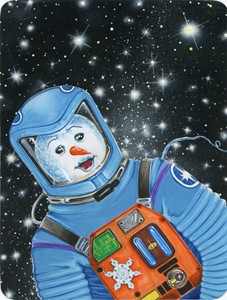 Our Snowland Tarot version of The Stars card (aka The Star) varies greatly from traditional renderings.

In Rider-Waite-Smith inspired versions, The Star shows a naked woman pouring water into a stream with stars overhead.

And that's about it.

Author Joan Bunning attributes the keywords Hope, Inspiration, Generosity and Serenity to The Star, and that goes along popular interpretations for this card. However, for those new to the cards--and, arguably, seasoned veterans--what is it about the traditional image that conveys these meanings?

In keeping with our goal to translate obvious meanings with our Snowland Tarot card imagery--as well as more subtle symbols and motifs to spark intuitive connections--we chose to make The Stars card a concrete, albeit unconventional, rendering intended to transmit feelings and associations of awe, wonderment, enchantment, transcendence and enrapture.

We have some incredibly perceptive and thoughtful fans on our Facebook page, some who offer their impressions into the cards. Renee Kazmar has this to say about the Snowland Tarot version of The Stars: 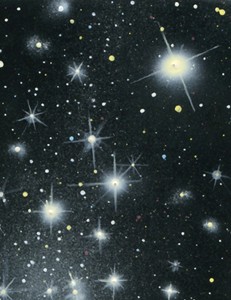 The first thing I notice when I look at the Stars card are the stars. The realism is breath-taking. I grew up in an area where the stars filled the night sky and looked exactly like your card. The stars are so powerful in the card that the Snowman, even though he is centered and normally would command more attention, comes across as almost insignificant, which is perfect for the scene because that's exactly how it really is--the feeling of being tiny and imperfect and insignificant amongst the millions of stars. I think that a card like that is wonderful for giving us humans some perspective and a reminder that the universe is huge, complex, and mysterious, and that we still have a lot to learn and much room to grow as a species.

What amazing insights! This was exactly our intention for this card. In fact, Ron's inspiration for The Stars is the "My God, it's full of stars!" scene from 2001: A Space Odyssey. And, that movie does, indeed, echo the last part of Renee's sentiments.

So, dear reader, what do YOU see in our version of The Stars? What meanings or keywords would you create for this floating snowmonaut? What symbols do you see that ignites your intuition? We'd love to hear your thoughts in the comments section!