Remember those magic 8 balls from decades long gone? You’d shake the liquid-filled ball, and a white pyramid with a message on it would float into the window as if by magic. Pretty freakin’ cool back then!

Fast forward into the 21st century, and U.S. Games Systems, Inc. has given a super-cool spin on this fun fortunetelling toy embodied in the Mystic Pyramid.

What is the Mystic Pyramid, you ask? 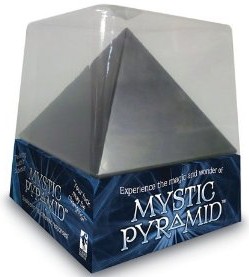 Well, it’s otherworldly gray pyramid that, when pressed down, booms out a prognostication to your every question.

Some of the messages you may receive via the Mystic Pyramid include:

• Your dreams are about to be realized.

• Revisit the issue at a later time.

• Your deepest joy will shine forth.

• Accept disappointment and move on.

• The outcome may surprise you.

• Embark on a new path with confidence.

With a deep male voice echoing a bit like the Great Oz—not to mention glowing blue light emanating from the pyramid “seams”—the Mystic Pyramid makes for a fascinating party game.

It’s so mystically attractive, I keep our Mystic Pyramid right on the entertainment center as a decoration. However, my husband and son have a hard time resisting pushing on the Mystic Pyramid when they walk by.

Finally, I had to admonish them: “Only for serious questions!”

If you’re looking for a fun gift for that hard-to-by person, or perhaps want to wow a youngster with his or her very own portable fortuneteller, you MUST get the Mystic Pyramid for them. The voice, the lights, the ease of use (and don’t forget batteries that ARE included!)—what’s NOT to love, right?

In fact, let me ask the Mystic Pyramid:

Mystic Pyramid, will the readers of my review enjoy you if they get you?

The reply: “You already know the answer.”

To get your Mystic Pyramid from Amazon, click here.

-- Janet Boyer, Amazon Top/Vine Reviewer, author of Back in Time Tarot, Tarot in Reverse(Schiffer 2012) and the Snowland Tarot(Schiffer 2013). Featured in Tales of the Revolution: True Stories of People Who Are Poking the Box and Making a Difference (A Domino Project eBook edited by Seth Godin)