The Empress and Emperor in the Garden 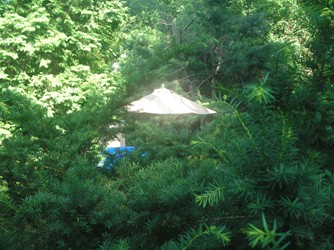 One of my favorite pastimes is walking around our huge yard, checking out the growth of trees, shrubs, plants and vines. Has the honeysuckle bloomed yet? Do I need to thread more of its vines along the wire fence? How’s my mint doing? Wow, the Asian lilies are about to unfurl! And look how fast that maple tree, planted from a tiny sapling, grows by the month!

Around chez Boyer, I call this the “3 hour tour” (swiped from the Gilligan’s Island theme song). In fact, I often enlist hubby for the tour—and we stroll around, marveling at the lush foliage and new life we often discover. (If I’m lucky, I can even talk him into transplanting hostas!)

During my 3 hour tours, I often contemplate the Empress archetype (which is natural enough), but also her consort, The Emperor. Tarot enthusiasts tend to associate The Empress with the garden, but The Emperor’s role is just as important. In fact, although she’s often venerated, The Empress—left to her own devices—can be quite destructive in this domain. 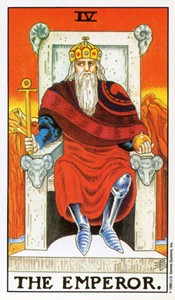 It is The Emperor that tills the ground and makes uniform rows for sowing. He also selects the seed or sprouts, often planting them according to an arranged grid or planned harvest.

The Empress nurtures and fertilizes everything in the soil—weeds and desired plants alike. She also nurtures blights and devouring insects, embodying the two sides of the Creator/Destroyer archetype.

The Emperor hoes and weeds the garden, even going so far to erect fences to keep out thieving animals. It is The Emperor who tries out home remedies like spearmint chewing gum to ward off invading groundhogs.

The Empress, however, cheers on pest and pollinator, beetle and butterfly, drought and torrents. It’s all the same to her.

The Emperor, at times overly aggressive in setting and enforcing boundaries, may resort to using poison or chemicals to keep weeds or pests in check. When The Emperor is on a schedule, and he usually is, he’d rather save time and energy by using harsh means to eradicate unwanted nuisances, rather than the slower, more thoughtful process of investigating and implementing less harmful practices.

The Empress generously gives her bounty—dirt, sun, rain and soil-aerating worms. These gifts grow a garden, often producing a delectable harvest enjoyed by both man and beast. Her offerings nourish and strengthen, fill and comfort. 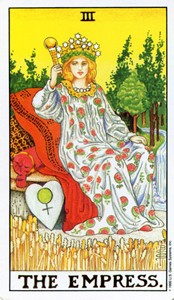 However, her efforts can be short-circuited by the zeal of The Emperor, who wants to get the most out of his land—even if it means ignoring the important cycle of fallowness.

While The Empress loves wildness—the twisting vines, enmeshed stems and creeping foliage—The Emperor recognizes that suckers need plucked and branches need pruned. After all, if non-producing outlets continue to use up vital reserves, the main stems, fruits, vegetables and flowers may suffer.

So The Emperor gets out his shears and clip, clip, clips away. It is the topiary creator or the Bonsai sculptor that falls under the aegis of this archetype.

But it’s a delicate balance.

If he chops or cuts too much, he will kill the plant or tree.

In our neck of the woods here in Pennsylvania, we get something called “monkey vines”. They are quite beautiful, even producing plump, purple berries. When they cover dead shrub or fences, they can be lovely. In fact, they are beneficial for the birds that eat their fruit. However, this invasive species also covers bushes, trees, flowers…whatever it can sink its tendrils into. It can cause damage…massive damage. Ron and I have spent hours pulling them down from pine trees, often resuscitating these majestic ones from their sun-deprived ailments. And boy has it made a difference to these trees!

Mother nature propagates these vines, but its Emperors like us who cut them back so that multiple more species can survive and thrive. 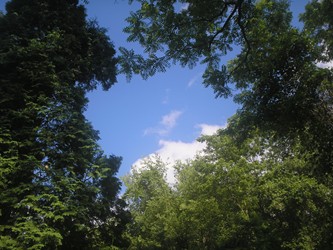 As in a garden, The Empress and The Emperor dichotomy plays out in our lives in many ways. To extend the metaphor, if life is a garden, then what are the weeds? The fruit? The pests? The suckers? The unattractive but necessary worms? The warm sun? Refreshing water? How do unwanted trespassers enter our plot—and how do we welcome them, tolerate them, or eradicate them? Where must fences be erected in our life…and are we keeping the right things out and the good things in?

The Emperor often gets a bad rap among Tarotists, especially feminists and the patriarchal-adverse. Yet, like The Empress, he, too, is needed for balance, healthy growth and a sustainable future...in not only an actual garden, but also our relationships, energy, time and endeavors.