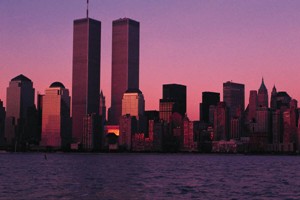 In honor of the 10th anniversary of 9/11/01, I'm reprinting a BIT Tarot Snapshot from Back in Time Tarot penned by Lon Milo DuQuette--courtesy of my publisher, Hampton Roads Publishing.

Like all the BIT Snapshots in my book, there's a brief introduction, a deconstruction of the memory/story/movie/event and the pairing of Tarot cards with the various components--followed by my commentary and three Your Turn exercises for you to experiment with.

Among other things, the BIT Tarot Method can be used to make sense of difficult circumstances, bringing awareness, insight and healing to even the most devastating situations. While seemingly nonsensical, even horrendous, things happen in the world and to us, we can try to navigate troubling times by pondering the suffering of others, creating personal meaning and resolving to "play the card life deals us" with courage and grace.

The destruction of the twin towers of New York City’s World Trade Center on September 11, 2001, was the seminal event of the first decade of the twenty-first century. Theories concerning what really happened abound, and nearly everyone, including me, has an opinion. Here’s what I see when I go “back in time” to view that terrible event and its aftermath through the magick lens of the Tarot.

The Moon: Two figures of the jackal-headed Egyptian god Anubis (guardian of the dead) stand before the dark twin towers of the Moon card. Drops of blood fall from the sky in the space between the two towers. All is not as it appears. Illuminated by the false light of the moon in her infernal aspect, the entire card is a glyph of madness and deception—the nauseating delusion of a nightmare.

The Tower: This card is also titled “the Blasted Tower” and “the House of God.” The scene is dominated by a lightening-struck tower crumbling in flames as human figures plunge from the heights. The white dove of peace, olive branch still in her beak, soars toward the edge of the card as if to flee the horrible spectacle. (See Joan Bunning’s “The Struck Tower” and Lisa Hunt’s “The Year of the Tower Card” for their takes on the Tower card in connection with 9/11.)

Eight of Swords: This card is also titled “Interference” or “Lord of Shortened Force.” Jet fighters that could have intercepted the hijacked commercial planes are occupied in a Vice President Dick Cheney–ordered and –supervised “exercise” many hundreds of miles away and unable to assist. Chaos on multiple communication levels ensues.

The Hanged Man: Television viewers around the world are helpless as they are bound to their sets as the scenes of horror unfold.

Five of Disks: This card is also called “Worry.” The large fragmented disks on the card suggest the breach in the wall where a plane or missile penetrates the building. When the Pentagon is hit, the nation worries that the White House will be targeted next.

Death: The enormity of the death toll begins to sink in as reports of the building’s occupancy numbers are calculated. The day has become a grotesque dance of death.

Ten of Swords: This card is alternately titled “Ruin.” Shortly after Lady Harris painted this card on September 18, 1939, she wrote Aleister Crowley saying, “I have done the Ten of Swords & promptly Russia takes up arms.” (For more information on the artist for Crowley’s Thoth deck, Lady Frieda Harris, see the commentary for this BIT Snapshot and for Mark McElroy’s “Finding My Way Back to Faith” in chapter 3.)

The Emperor: Presidential authority gains near martial-law omnipotence. Congress becomes a rubber stamp to the build up to war. Habeas corpus is suspended. Phones and e-mails of an entire nation are monitored.

In his intriguing book Understanding Aleister Crowley’s Thoth Tarot, Lon had this to say about the deck he used for his BIT Snapshot, one of the most arresting Tarot decks extant:

When we ask what makes the Thoth Tarot unique, the first and most obvious answer is the artwork...The cards of the Thoth Tarot display more than just Lady Harris’s skillful execution of traditional tarot images, fine-tuned to reflect a more modern understanding of self and the natural universe...Harris exceeded Crowley’s wildest expectations by actually incorporating within the very fabric of her style the profoundly subtle essence of his spiritual doctrine. It was a supreme wedding of artistic technique and deepest mysticism. 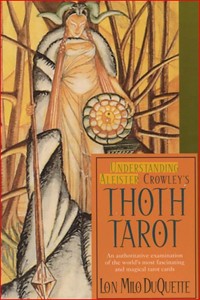 Some Tarotists associate the Emperor with the “long arm of the law” as well as all things governmental. On one end of the spectrum, laws can protect individuals and enable a smoothly functioning democracy. Taken to the other extreme, however, laws (or even unauthorized actions) can result in invasion of privacy, abuse of authority, and oppression.

Quoting Aleister Crowley in the Book of Thoth, Lon notes the following about the Moon card in Understanding Aleister Crowley’s Thoth Tarot: “Upon the hills are black towers of nameless mystery, of horror and of fear. All prejudice, all superstition, dead tradition and ancestral loathing, all combine to darken her face before the eyes of men.” Indeed, as 9/11 was occurring, the public watched in helpless horror, not knowing what was happening as plumes of dark smoke rose upward and ash spread across New York City.

In the Thoth Tarot, six horizontal swords and two vertical ones form a type of lattice in the Eight of Swords card. Because the swords suit often relates to the realm of communication, the overlaying swords almost seem to form a wall—perhaps signifying blocked messages. In fact, in his book, Lon describes the complex Qabalistic and astrological associations with this card, noting, “Jupiter in Gemini indicates and element of luck in intellectual pursuits. Hod is the sphere of Mercury, who rules Gemini. As it does to the eights of the other suits, however, Hod’s imbalance and lowly position on the Tree of Life throws a wet blanket on what otherwise might have been a fortunate coupling.” If those jet fighters weren’t already engaged in military exercises hundreds of miles away, their presence would have indeed been advantageous and—just maybe—could have intercepted the second plane that slammed into the Twin Towers. 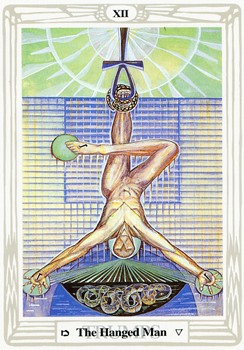 In many Tarot decks, the Hanged Man—or Hanged One—is suspended from a tree or post. Most times, he appears content, even radiant. In other images, he appears trussed up against his own will. In the Thoth Tarot version of the Hanged Man, the figure is suspended upside down, the left leg attached to an ankh via a coiled snake. Phrases such as “hung up,” “hang on,” “hang tight,” “hang ten,” “hang in there,” or “hung in the air” all imply some type of fixation, cessation, or suspension—and on 9/11, many around the world suspended everyday life as they sat glued to their televisions in complete shock.

The Death card in the Thoth deck is truly a work of art—sacred geometry, in fact. Technically speaking, it’s one of the most striking renderings of death in the Tarot, especially with Lady Harris’s painted geometric lines emanating from the crowned ebony skeleton. I’m actually a bit surprised Lon picked the Death card for this BIT Snapshot because I’m familiar with his unusually positive take on this card. He writes: "The Death card of the Thoth Tarot is the antithesis of those found in traditional packs. This is no stiff grim reaper standing on the Earth, indiscriminately mowing down people, young and old, humble and highborn. This Death is vivacious and flexible. He wears the crown of Osiris and dances madly on the bottom of the sea. Instead of mowing down the living, he uses his scythe to stir up bubbles of new lives from out of the seemingly dead and decaying sediment." 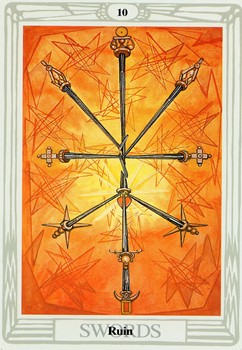 Regarding the Ten of Swords, Lon acknowledges, “It is difficult to put a good spin on this card” because “[a]long with the other tens, the Ten of Swords can’t degenerate any lower without completely changing suits.” Quoting Crowley, Lon says the creator of the Thoth Tarot intended the Ten of Swords to represent the “ruin of the Intellect . . . and even all of mental moral qualities.” For eons, humanity has speculated if any “good” can come from violence and war. Just as many lives, families, businesses, and alliances were ruined on 9/11, violence continues to ripple outward from the fateful day.

•  The worldwide impact of 9/11 was huge. Where were you when the Twin Towers fell? What were your thoughts and feelings? How has your view of America changed? Your view of the world? Choose cards that represent your attitude, surroundings, and reactions at the time and at present.

•  How did your friends, family, coworkers, teachers, or community react to 9/11? Were there blood drives, appeals for donations, or recruitment for volunteers to help at Ground Zero? Which cards do you feel best represent what was going on around you at the time?

•  If we were to believe the news, the world’s opinion of a post–9/11 United States has shifted dramatically. How do you feel other countries view America? Select cards to represent the actions taken on behalf of the United States, as well as the attitudes and perceptions of the world at large.