The BIT (Back in Time) Tarot Method is a technique created by Janet Boyer for examining events, people, stories and memories, and is the basis of her book Back in Time Tarot  (Hampton Roads Publishing).

“What a celebrated symbol that Star is! So many stories, poems, songs about a falling star, a lonely star, a twinkling star, a shining star, wish upon a star, you are my star, written in the stars, star wars, and so on. Such is the power of a Star, but what makes it so? A Star can convey our wishes to eternity.” – From Playing with Symbols: The Essential Companion Book to the Sakki-Sakki Tarot 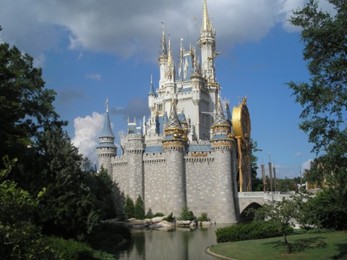 “When you wish upon a star, makes no difference who you are, anything your heart desires will come to you…”  From the Walt Disney motion picture Pinocchio, this lilting, magical song won an Academy Award for best song in 1940. Still readily recognizable by young and old, When You Wish upon a Star captures the childhood nursery rhyme “Star light, star bright, first star I see tonight…I wish I may, I wish I might, have the wish I wish tonight.”—a rhyme of longed for hopes and dreams.

One of my fondest wishes was to visit Walt Disney World (WDW) in Orlando, Florida. Well, in May of 2006, an unusual dream filled my sleep, one where my family and I were at WDW. When I awoke, a strange feeling overcame me. I felt that I was supposed to go to WDW—that year.

Not expecting an enthusiastic response (let alone in the affirmative), I awakened my husband and told him of my dream. I asked him point blank—can we go to WDW in August for our anniversary?

Imagine my surprise when he was quite open to the idea! In fact, I started planning the vacation that day—and we celebrated our ninth wedding anniversary at WDW. 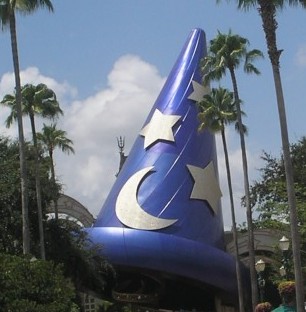 Star – I chose this card to represent the childlike longing I had in my heart to visit WDW. No one I knew had ever visited the parks, and I’m not sure where my desire originated—except, perhaps, my love for Disney movies and their celebration of the Magical Child archetype.

Queen of Wands – Was it the Queen of Wands-like power of persuasion that convinced my husband to agree to a rather spontaneous vacation? While that could be true most times, I can’t help believe that my dream—and our vacation—was something planned beyond this earthly realm…

The Fool – Although I expected a Knight of Pentacles response (or perhaps even the Four of Pentacles!) from my husband, he got in the spirit of the trip much like The Fool. He was willing to take the financial risk, willing to go on a (probable) once-in-a-lifetime vacation and excitedly joined in on this unexpected whirlwind—based on a dream.

Eight of Wands – I see this as a “smooth sailing” card and everything about our flight to Florida was smooth and enjoyable. We didn’t have to wait through security lines at the airport, and although it was the first plane trip for my husband and son (and only my second) we weren’t nervous at all. 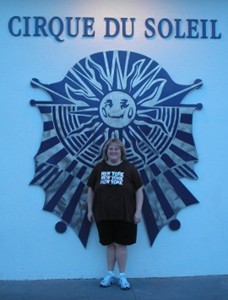 Four of Wands – One of the first things we did in Florida was attend La Nouba, the permanent Cirque du Soleil shows located at the Downtown Disney area. This energetic acrobatic circus group performed astounding feats of agility and daring, while live musicians and interactive clowns accompanied the highly skilled dancers, gymnasts and cyclists. This amazing show reminded me of the Four of Wands card in the Victorian Romantic Tarot by Karen Mahony and Alex Ukolov, which depicts traveling performers on an outdoor stage.

In the companion book to this deck, Karen writes of this card, “The Four of Wands is about the joy and sense of freedom that comes from taking time out from the usual routine. Nowadays carnivals, parades and rock festivals are often the events that allow us to be a bit outrageous, do something daring, have fun and just forget work and responsibilities for awhile.” She notes that in the nineteenth century, it was more likely circuses and traveling fairs “that provided this temporary social liberation.”

Six of Cups – Every “Cast Member”, as WDW employees are called, was extraordinarily kind. One time, we were trying to figure out how to get all of us in a picture, and a Cast Member—not even on duty, just walking through the park—stopped and cheerfully asked if she could take our picture for us. The proactive kindness of WDW employees reminded me of the benevolent gift portrayed in many versions of this card: the gift of flowers. 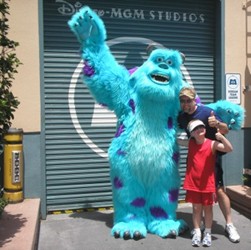 Six of Wands – One of the many highlights of WDW is the amazing parades held in the various parks. From the brightly lit SpectroMagic parade held in the dark of night to (my favorite) Share a Dream Come True parade featuring spectacular snow globe floats, glorious music and over 100 performers, the gleeful anticipation of beloved Disney characters arriving in fantastical fashion encapsulates a primary energy of the Six of Wands card.

The World – At one point, we were in Epcot and struck up a conversation with a gentleman from Syria. My favorite park in WDW, Epcot features pavilions, entertainment and restaurants from around the world. During the informative conversation, he mentioned that another family from Pennsylvania once talked to him and they were from a “sister city” that shared the same name of his hometown in Syria. Interestingly, my husband once lived in this very town in Pennsylvania! “It’s a small world after all…”—indeed!

• Recall a favorite vacation destination, trip or outing you’ve experienced. Which Tarot cards would you select to represent what you saw, felt and heard during that time?

• Whether on TV, in person, from a book or during a movie, have you ever witnessed what can only be deemed a “spectacle”? Re-create the scenario using Tarot cards.

• Think of a Disney movie, TV special or character that enjoys enduring popularity or currently seems “everywhere” these days. Choose Tarot cards that you feel captures the essence of the character, show or related accoutrements.

Yes, those are actual pictures of our first (and only) trip to Walt Disney World!