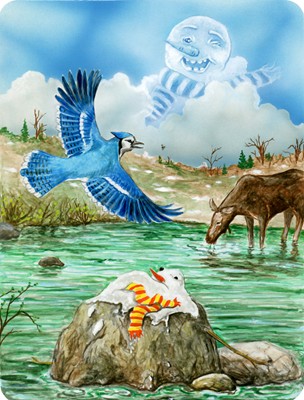 In Tarot, nothing scares the shit out of people more than the Death card.

Well, maybe The Tower or The Devil, but still….Death’s the favored heebie-jeebie inducer.

And it’s a shame, really, because Death—associated with the powerfully intense, deep and transformative sign of Scorpio—offers us a profound perspective on impermanence and the circle of life.

That’s why we named the Snowland Tarot’s version of the Death card Impermanence, to better reflect this card’s energy and remove the intimidation. (And this is also why we’ve renamed The Devil Trapped and are renaming The Tower card Removal).

The snowman, comprised of water molecules, melts. But is he really dead?

A moose drinks from water fed by the melted snowman. Evaporated water turns into clouds and—what’s that I see?—a winking, smiling snowman. And a bluejay is about to eat a bug…

Nature is an incredible teacher, no?

I’ve always felt that Death was an ill-suited name for this Tarot card. Death, in terms of the dictionary, means the permanent cessation of life. The end.

But Death, or in Snowland Tarot’s case, Impermanence, doesn’t reflect permanent endings in the least. The 10 of Swords does, yes, because it’s a part of the Minor Arcana which not only reflects daily living, but also the limited perspectives humanity brings to the “big stuff”. If there’s an “ending” card in Tarot, it’s the 10 of Swords, in my opinion. 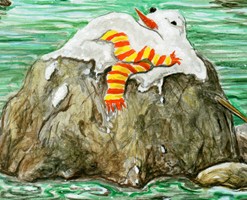 And the “big stuff”—those universal patterns reflected in all countries, cultures, eras—they are reflected by the Major Arcana, which Death is among (Trump 13 to be exact, which is yet another superstitious reason that people great freaked by this card).

So I don’t see the Death card as a permanent ending. A change has taken place, but it’s more than that (change is most reflected in The Wheel of Fortune, from my perspective). There has been an actual transformation (which is why Death has been renamed The Phoenix in other decks, better showing this card’s energy), one in which a passing of one thing has led to the generation of another.

Take reading a book, as an example.

Yes, when I’ve reached The End, it’s, well, the end! But is it really? Of course not! The images stay in my mind! The lesson, message, or storyline has become a part of me!

And if the media gets hold of it, it’s will remain in posterity in the form of a movie, merchandising, sequels, video game, interactive website, fan discussion boards, FB post, Tweet, Amazon review, book club and so on.

If you subscribe to life after death, then you’re already comfortable with the idea of our spirit outlasting our earthly form. But even if you’re an atheist, our life still survives our earthly termination!

So Death isn’t an ending, nor is it necessarily a beginning (think of a caterpillar and a moth). Rather, the energy of Death in Tarot is regeneration. It’s movement, not stagnancy (reversed, however, it is!).

For example, consider these wise observations on the Death card by Lon Milo DuQuette in his book Understanding Aleister Crowley’s Thoth Tarot:

The Death card of the Thoth Tarot is the antithesis of those found in traditional packs. This is no stiff grim reaper standing on the Earth, indiscriminately mowing down people, young and old, humble and highborn. This Death is vivacious and flexible. He wears the crown of Osiris and dances madly on the bottom of the sea. Instead of mowing down the living, he uses his scythe to stir up bubbles of new lives from out of the seemingly dead and decaying sediment.

What we term physical death is, indeed, inescapable (much like taxes, another part of the astrological 8th House ruled by Scorpio!). Like the Rider-Waite-Smith version, death does “mow down” everyone, regardless of status.

That perspective a mere earthly take on this card, one not worthy of a Major Arcana key.

No, Death, or what I love to call Impermanence, reminds us that we “die daily”, and anything we see is a mere passing snapshot. How we survive our death, our legacy, is up to us.

But survive, we will.

Have you "liked" the Snowland Tarot on Facebook? If not, here's your own personal invitation! Just visit our Snowland Tarot Facebook page to see sketches, in-progress images, and final cards--or to chat with us or win some Snowland swag in a giveaway. We're also on Twitter at @TeamSnowland. And don't forget SnowlandBlog.com! To see all completed cards, in miniature, take a looksee at SnowlandTarot.com.