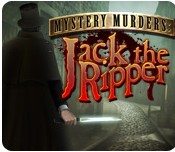 I’ve played a handful of PC games claiming to be Tarot-related, but the new Mystery Murders: Jack the Ripper is the first one to not only include actual Rider-Waite card images, but actual Tarot explanations and spreads.

Even better, this is one of the better PC Hidden Object/Puzzle games I’ve played (and there’s been dozens!).

The hidden object parts are actually quite challenging, even in casual mode (I’ve had to use the hint button at least once in every scene), and while the puzzles aren’t too difficult (like those in Mystery Case Files: Madame Fate and subsequent MCF games), they’re still engaging. There are also clever, original matching games I haven’t seen before in a PC game of this stripe, so it’s nice to actually be surprised when playing one!

One scene even featured a Celtic Cross layout, and the journal explains Tarot and the terms Major and Minor Arcana (how cool is that?)

I’m only 45 minutes into it, but I can say that, so far, this is a very well-done Hidden Object/Puzzle game with attractive graphics and easy-to-use interface.

Below are some screen shots I took. Nice eye candy, huh? 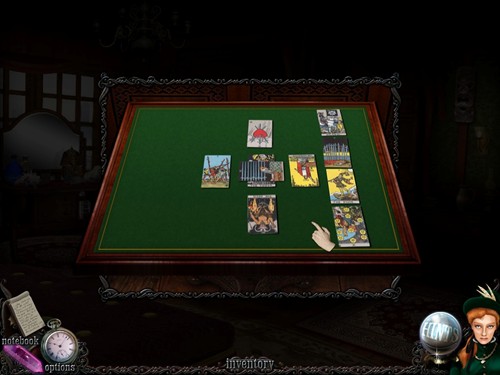 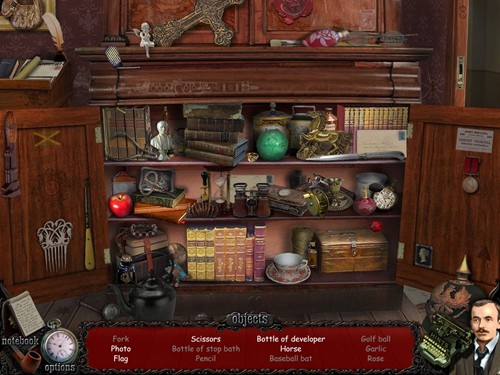 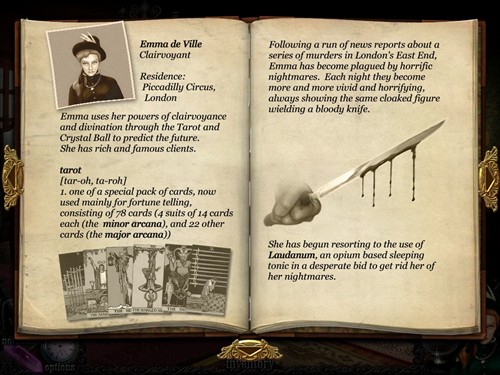 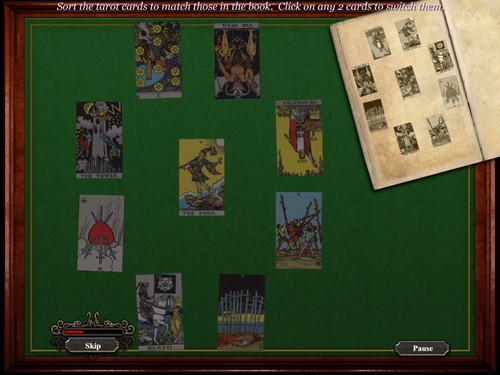 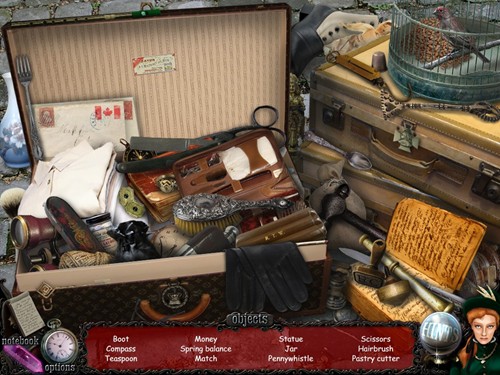 Well hi, Kirsten! How are ya, girl?

Good catch on the RWS anachronism! I love these games, too. My absolute favorite is Mystery Case Files: Madame Fate which features a fortuneteller, but what I love about it is the puzzles and games. I've played it many times! (I can never get the last puzzle though. Boo!) http://amzn.to/oVcr9Z

Prime Suspects and Huntsville are great, too (don't like the newer MCF though...Ravenhearst, Dire Grove, etc.).

So glad you stopped by!

Mystery Case Files was the game that got me hooked! It was creepy in a fun sort of way.

As for myself... quit my job, doing some consulting (in Jordan for the month) and trying to publish some paranormal mystery novels that I wrote. At this point, I'm fairly certain I'll self-publish, at least the first one. (And yes, Tarot is involved!)

Looks like you're rocking the publishing world yourself. You go girl!

I was at your website earlier! I was wondering what in the world I was looking at, but anything with the word "mystery" or "detective" in the title is a sure bet I'll be intrigued. :oD

Well good for YOU! It looks good from what I can see. Why not at least try traditional publishing FIRST? The worse that can happen is that you'll get a "no", right? I can refer you to some publishers if you send me a synopsis, target audience, etc.

As for me...ah, just one of the seasons for giving. LOL Just so full of "stuff" that needs to come out of me, I just can't stop creating it seems. Teehee! Thanks for your encouragement, pal! XO