Ron’s Playlist (So What DOES An Artist Listen to While He Paints?) 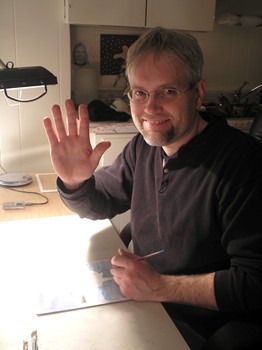 With over 500 songs on his Sansa Fuze, Ron admits that not every song sounds ideal when he’s in the midst of painting. Enjoying music while working more than not, Ron has a shortlist of songs that always feels like “soul grub” no matter what he’s painting (click on the links to hear the songs or watch the videos!):

Sixpence None the Richer -  ANY song!
Enya – Caribbean Blue and Orinoco Flow
Jimmy Hendrix – All Along the Watchtower
Olivia Newton-John – Magic
Police – Bring on the Night; King of Pain; Message in a Bottle; Spirits in the Material World
Billy Joel – Downeaster Alexa
Scorpions (With the Berlin Philharmonic, from Moment of Glory) – Send Me an Angel
Fuel – Innocent
Frida – There’s Something Going On
Pat Benatar – Love is a Battlefield
Madonna – Hollywood
System of a Down – Roulette; Hypnotize
Evanescence – Taking Over Me
Eurythmics – Sweet Dreams
Gary Numan – Cars
Ace of Base – Cruel Summer
Sting – A Thousand Years
Tears for Fears – Shout
Nirvana – Most of the Unplugged Album

Below is a super-cool version of Madonna's "Hollywood" (one of the songs mentioned above) that includes a video montage of Rider-Waite Tarot cards!