Taking the Averages (Baby Out with the Bath Water 2) 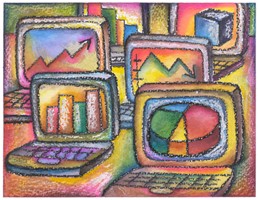 Years ago, I belonged to a church with a dynamic pastor. His sermons were engaging and practical, mostly empowering and uplifting.

One of the sermons stuck with me, a homily dealing with “averages”.

The minister, speaking from a rather traditional stance mind you, said that God doesn’t measure our lives by a few instances…but rather, “averages”. And, he encouraged the congregation not to judge their life based on a few acts, either, but rather, how they lived “on average”.

What a fantastic concept, especially for those with extreme inner critics that like to cut off at the knees!

The point being that we’re all human, we all make mistakes, and we all have quirks that may not “measure up” to either our own standards or values, or those of others. (After all, in the Greek, the word for “sin”—hamartia—is an archery term that merely means to “miss the mark”).

I’ve found that this “taking the averages” approach a great way for choosing whose ideas, teachings or influence permeates my boundaries. However, as a public figure, I’ve found it interesting to witness how easily some—especially in the insular (incestuous?) online Tarot world (if you don’t know what I’m talking about, you’re not a part of it, so no worries!)—throw the “baby out with the bath water” (see Part 1 at this link).

For example, some have fawned all over me, Ron, and Snowland Tarot on our Facebook page. They call the images “brilliant”, “innovative”, “inspired” or “extraordinary”. They take time to share how the images affects them, or connect to esoterica or the “down and dirty of life”.

But then, a few join an online Facebook group I was a part of…and see the 5 of Wands or 7 of Swords or Magician part of Janet (as an example). Janet, when in groups, is prone to “shakes things up”…on purpose. Why? Because nothing grows in stagnant pools or manifests without contrast to “goody two shoes light and love”. Because she serves Trickster for a greater cause. Because innovators and pioneers don’t fit snugly among groupthink. 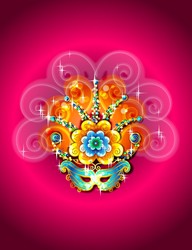 Forgive me for slipping into 3rd person there, but who I am—my soul, spirit, the part without the human trappings, whatever you want to call it—isn’t my earthly persona(s) nor the roles I play. The archetypal masks I don as service TO my soul, and as service for others and the higher good, are not ME. Likewise, the archetypal patterns that YOU play out on a frequent basis. (See, that’s where we get tripped up: confusing our archetypal patterns with Who We Are or what Someone Else Is).

So, I’ve noticed how people have “unliked” the Snowland Tarot Facebook page, or unfriended me on Facebook, or blocked me on Twitter. Interestingly, some of these were the same ones that have gushed over me, my books, my reviews, Ron’s art, the Snowland Tarot concept and so on.

These ones—and I’m assuming they’re not just sycophants—loved a large body of work (whether reviews, one of my books, my blogs, Ron’s images, etc.). But something they witnessed, a small snapshot of behavior, caused them to “throw out” the majority of what (they said) they loved.

Imagine a scale, if you will.

On one side is all the good, desirable, appreciated, stimulating, informative, fresh, agreed with, helpful, beautiful, fill-in-the-blank things that make them “fans” or “likers” or “followers” or even “friends”. Looks pretty darn heaping, that side of the scale. 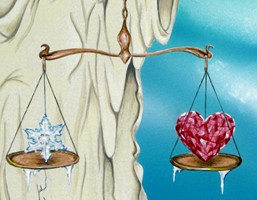 On the other side of the scale, toss one or a few incidents, comments, reviews, or observations that generate discomfort, disagreement or conflict. Small pile, if that.

But somehow, in the eyes of a viewer, that small pile somehow outweighs all the “perceived good”. Thus, I, my work or Snowland Tarot or whatever…gets tossed out. Janet is now a pariah—excluded, blocked, banned and ignored or, worse, stalked, harassed and slandered.

It’s not just me or my work, either.

How many times have we admired, enjoyed, praised or benefited from someone or his work and, he makes a misstep or says something we don’t like or does something we disagree with and—POOF!—we effectively erase him and his influence out of our lives.

What does this say about us?

How do we grow when the people we admire or respect do what we like or want 100% of the time? Where is the learning through contrast? And what if that admired one eventually screws up (in our eyes)? Says something that upsets us?

Are we then off to the next person who will stroke our egos or make us feel fuzzy or tell us what we want to hear or ensures we stay in our comfort zones?