“For centuries, the art of tarot and the science of astrology have been closely linked. Now, with the help of Tarot and Astrology, you’ll master the connection between astrology and tarot—not as two separate fields of study, but as a seamless, integrated whole. If you’re a tarot reader, this book will help you learn astrology. If you’re an astrologer, this book will help you learn tarot. And if you already use the two arts in combination, Tarot and Astrology will help you master both specialties.” – From the book 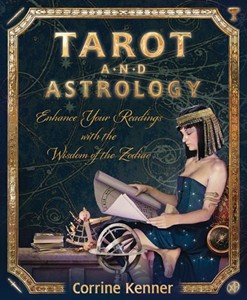 If you’ve been into Tarot for any length of time, you’ve no doubt seen the astrological correlations bandied about in books and on blogs. For the well versed, this fluidity between two arcane disciplines generates great insights—not to mention a communication shortcut to doubled esoteric treasures.

But what if you’re new to Tarot? Or, what if you’re familiar with the cards, but you’ve learned them on your own terms or from someone who doesn’t use astrological correlations in card interpretations, nor in their metaphysical practice or teachings?

Not only can the mere mention of Astrology in conjunction with Tarot cause fledging (and intermediate!) Tarotists to get the vapors, but it also may discourage readers from going further with the Tarot—precisely because they assume that astrological fluency among some Tarot enthusiasts means all must be fluent in order to be a good reader. No so!

However, Astrology brings its own rich storehouse of symbolism and archetypes, which means by becoming familiar with the secret of the stars, if you feel drawn to do so, you can only expand your cache of associations and, arguably, become a more knowledgeable, skilled tarot reader.

And this is where Corrine Kenner’s new book Tarot and Astrology comes in. I don’t know how she managed it, but she not only gives Tarot readers a solid introduction to Astrology, but also explains why in the world astrological correlations make sense through the lens of each card.

So when discussion The Emperor, for example, Corrine explains this card’s connection to Aries—including behavior patterns, attitude and the ram symbol. That would be adequate, but then she explains how Aries rules the head (yes, every zodiac sign is connected to body parts, if you can believe it)…and what that means for a “head-based” leader with other “head” associations (issues?).

But my favorite part of Tarot and Astrology is the Minor Arcana section. Corrine ably explains the astrological decan and placements of each Minor card, and how that energy correlates to Qabalistic spheres on the Tree of Life. For example, I love how she explains the 7 of Cups in connection to Venus (which connected to the sphere Netzach and the watery realm of Briah):

At the moment, the seven Cups are still in the process of manifestation. Their shape and structure hasn’t yet materialized. For the time being, they offer nothing but promise and possibility—along with tantalizing options of perfect happiness and joy. Think of them as unborn children: when women are pregnant, they dream of all the love and success they’ll share. Before those infants actually emerge, squalling and demanding to be fed, those children are perfect and unblemished little people.

Wow, isn’t that the truth when faced with enticing options of the 7 of Cups? And, really, only a mother could make that brilliant connection in my estimation (meaning, Corrine also brings her life experience and wisdom to this book, as well).

Now, if this is all that Tarot and Astrology contained, it would be well worth paying retail. But the author doesn’t stop there. No, Corrine provides charts for court card and elemental associations, as well as the Wheel of the Year and zodiac houses. She even takes us through an actual reading with the Horoscope Spread (one of my favorites).

And then there’s the accessible but thorough crash course (with images) explaining house opposites (e.g. Taurus and Scorpio) and how they energies play out in the corresponding Tarot cards (Hierophant wants to maintain status quo, Death wants to shake it up or take it away). 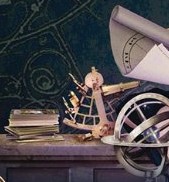 But she’s not done! She actually shows reader how to read a horoscope chart (think The Only Astrology Book You’ll Ever Need…but more succinct and with Tarot flair), providing several famous examples with complete astrological breakdown (Prince William, Marilyn Monroe, Dali, etc.). Topping it off? A nine-page glossary of astrological terms!

Throughout the book are grayscale images of the recently released Wizards Tarot, co-created by the author, so readers can track the symbols and stances as she discusses them.

I am thoroughly impressed by Tarot and Astrology. If you’ve ever been interested in the crossroad, and meeting, of the stars and the cards, you’ll find this book informative and engaging. If you’re a Tarot reader, your knowledge will increase exponentially by studying and using this book (and its revealing spreads). If you’re an astrologer, you’ll gain a unique backdoor perspective on Tarot, which will no doubt enhance your practice, too.

Click here to get your own copy of Tarot and Astrology from Amazon.com.