We LOVE making and eating chili at Chez Boyer, especially when the weather starts getting chilly. Chili is one of the easiest things to cook—and the hardest to screw up. 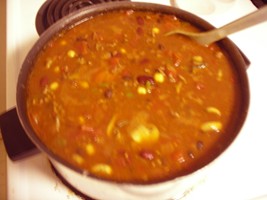 Heat the olive oil in a Dutch oven or large cooking pot (unless the ground beef is fatty, then you won’t need it) on medium-high heat. Add the ground beef and sauté until no longer pink. Add the minced garlic, salt (approximately 1 Tablespoon), pepper and chili powder. Combine. Then add all the tomatoes, beans and bag of corn. Simmer on low for 30 minutes – 2 hours. Add sugar to taste (about 1 Tablespoon).

And that’s it! I just made a pot and my son loved it so much, he just ate his FIFTH bowl!

Here are some variations:

• If you’re a vegetarian, substitute 2 lbs. of fresh mushrooms for the beef. You can use any kind, but I like the white button mushrooms chopped in large chunks because they resemble the mouth feel of meat. In the past, I’ve added some sliced mushrooms to the meat mixture while browning, so you can do that, too.

• If you don’t want to add the liquid from the beans, you can drain them—but then add more crushed or diced tomatoes. I have added stewed tomatoes to the mix, as well—but the pieces are so large, you may want to cut them before adding.

• You can use any type of beans. I’ve used kidney beans, northern beans, black beans (Ron’s favorite), garbanzo beans (chick peas)…it’s really up to you. I think the best tasting combination is the recipe I’ve just shared, though.

• If you’re watching your fat intake, feel free to drain your meat mixture before adding the cans of tomatoes and beans. I’m of the Paula Dean school of cooking, so the more fat, the better for me!

• If you don’t have fresh garlic on hand (I rarely do), just use minced garlic in a jar (doesn’t matter if it’s preserved in water or olive oil…I’ve used both).

• You can add diced onions and/or diced green peppers to the meat mixture if you want. I rarely do because the diced tomatoes I use often have onions already in them, as do the stewed tomatoes. I’m not super big on the green peppers in my chili, plus, it can cause some major heartburn (if the chili itself doesn’t get ya!)

• You can use any combination or variation of crushed, diced or stewed tomatoes. One time, Ron brought home roasted diced tomatoes, which added a smoky flavor. I mostly use Italian diced tomatoes because of the extra spices.

• Adding sugar is a trick I learned from my Dad, who was an E6 staff sergeant cook in the army. We add sugar to our chili AND our spaghetti sauces, and everyone always raves about our “secret” ingredient. Interestingly, both my Mom and my Dad make chili differently from me (and each other). In fact, at their church, they always end up winning 1st and 2nd place in the chili cook-off. (I keep threatening to go back to Christianity just so I can join their church and beat their ass in the annual chili cook-off!)

• For added richness, you can substitute butter for the olive oil—or add butter TO the olive oil. Take care you add the meat rather quickly, though, because butter has a low burn point. Adding olive oil raises the burn point, which would give you some more heating time before adding the meat.

-- Janet Boyer, Amazon Top/Vine Reviewer, author of Back in Time Tarot, Tarot in Reverse (Schiffer 2012) and the Snowland Tarot (Schiffer 2013). Featured in Tales of the Revolution: True Stories of People Who Are Poking the Box and Making a Difference (A Domino Project eBook edited by Seth Godin

We love chili! We don't eat meat, and the hubs doesn't eat mushrooms (I know, wtf?) so we use texturized vegetable protein, which is soy, and it turns out beautifully. There is something so comforting about coming in to a slow cooker full of yummy warmth. Thanks for sharing your secrets!

Hi Amanda! I really need to try tofu sometime. I'm just intimidated by it because I don't know what to do with it! I suppose it just absorbs the taste of what's cooked with it, then?

You know, even if your hubby doesn't like mushrooms, all the other stuff hides the taste of them in the chili. In fact, I can't imagine them tasting much different from tofu (but I could be wrong). :o)

Thanks so much for stopping by to visit! Now, I'm craving chili... Teehee!