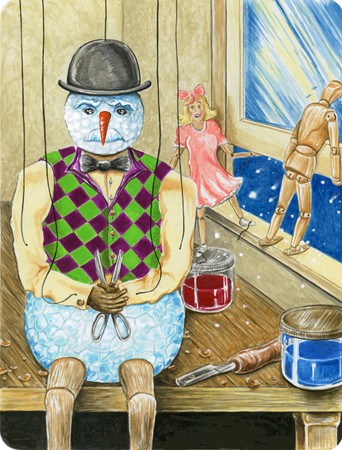 As I was prepping the borders of the finished 8 of Swords card on my computer, our son, Noah, peered over my shoulder at the completed painting.

“Do you think the snowman with the hat will cut his strings?” I asked him.

Immediately Noah replied, “After a decade on strings, he probably doesn’t mind it anymore.”

“Why did the girl cut her strings?” I asked.

“But why did she cut her strings, but the other marionette didn’t?”

Again, Noah had a quick answer for me: “Because maybe those strings were uncomfortable to her”.

Hmm. Talk about “out of the mouth of babes” and untainted wisdom…

“OK, but what about the artist’s mannequin doll? It doesn’t have strings. Why did it want to leave?”

Without hesitation, Noah says, “He doesn’t want to be in the workshop”.

“But why?” I pressed further.

“Because he wants to see things that no toy has seen before", he answered.

And there you have it.

Do you think the snowman with the bowler hat will cut his strings? Why or why not?

Why did the girl marionette cut her strings? What about the artist’s mannequin?

Where might they be going on a snowy evening?