The Nutcracker: The Untold Story 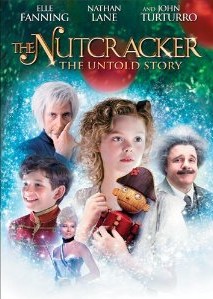 Having just caught the talented Elle Fanning in the movie Super 8, and knowing how good of an actor John Turturro can be (Secret Window, Quiz Show, Monk’s brother, etc.), I thought I’d buy The Nutcracker: The Untold Story from Amazon without first seeing it.

Boy, what a big mistake!

My whole family and I were transfixed, especially as the wooden nutcracker (in awesome CGI) and Mary ride an enchanted elevator sleigh up through a humongous towering Christmas tree. We had no idea what would happen next, because this “re-telling” of The Nutcracker had been unpredictable from the beginning (e.g. Einstein replacing Uncle Drosselmeier, Mary’s mother being an opera singer about to make her debut in front of important politicians, etc.).

However, once they got into the realm of the Rat King, things start getting dicey—violent and creepy, even.

The Rat King (Turturro) and his minions all have rat faces, resembling Hitler’s SS in uniform and demeanor (I can handle that—it makes sense). However, things soon turn violent (beyond capturing citizens of the magical kingdom).

For example, a large shark swims in a gigantic aquarium. He doesn’t appear menacing beyond being a shark. The Rat King, as he’s threatening the captured citizens with a bizarre musical routine, deliberately drops electrical lights in the aquarium. The poor shark thrashes about, as he’s being electrocuted—not for a few seconds, but MANY seconds. It was distressful and disturbing to watch.

My family and I were in shock. Soon after, the Rat Queen (the Rat King’s mother) summons Turturro’s character. She is unkempt, drunken and barely dressed—wearing fishnet stockings (!). In a creepy Oedipal moment, she urges her son to come closer…and as he bends down for her to tell him a secret, she BITES him (hard and long).

That was it for us!

If you’re wanting a magical family Christmas movie, this is NOT the one to get! However, if you revel in “dark”, twisted holiday fairytales, you may get your jollies out The Nutcracker: The Untold Story.