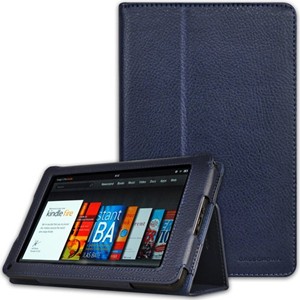 My CaseCrown case for Kindle Fire just arrived via FedEx...and it's wonderful!

I had a hard time making up my mind as to what color I wanted but ultimately chose the dark navy blue; I figured it would be less distracting than the chartreuse one I was eyeing. ;o)

Watch the video on Amazon; the CaseCrown coverworks just like the video shows. The material feels like leather with thick, tight stitches. It even smells good...sorta like a new car smell! The inside is a soft, attractive suede-like material that's a few shades lighter than the outside "leather". 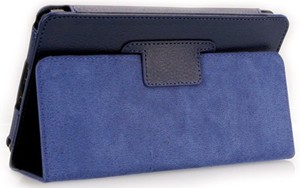 I particularly like the magnetic cover that safely encloses the Kindle Fire; some covers are pretty, but don't have this important feature (I suppose to mimic the look and feel of an actual book..?).

My only criticism is that the built in "stand" only holds the Fire in the landscape position...not portrait. This matters a wee bit to me because I have severe tendonitis that causes numb and/or painful hands, and I prefer reading my eBooks in the portrait orientation.

This is a great holder that will leave your Kindle Fire protected and add very little weight to the device. Highly recommended!

-- Janet Boyer, Amazon Hall of Fame/Vine Reviewer, author of Back in Time Tarot, Tarot in Reverse (Schiffer 2012) and the Snowland Tarot (Schiffer 2013). Featured in Tales of the Revolution: True Stories of People Who Are Poking the Box and Making a Difference (A Domino Project eBook edited by Seth Godin)