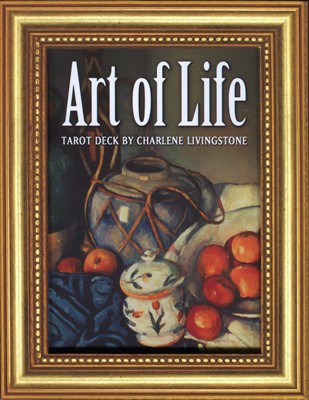 “I realized that by drawing inspiration from my background in art history and my lifelong passion for quotations, I could capture the essence of the meanings behind each card while simultaneously encouraging the reader to interpret its personal meaning…I created the Art of Life Tarot because I wanted to empower the reader. I wanted each card, no matter what the implied context or meaning, to give the reader a sense of strength, possibility and optimism. I wanted the journey of the tarot to take the reader back to him or herself…” – Charlene Livingstone

In less experienced hands, a Tarot deck made up of painted masterpieces paired with quotations would make for a shallow novelty deck. Thus, I didn’t hold my breath when I opened the Art of Life Tarot, despite the lovely box.

By the time I got to The Chariot—which literally took my breath away (for personal reason)—I realized that this deck was something special.

I put the deck down and began to read the Little White Book, curious as to the story behind the deck—and the woman who created it. Why did this deck feel so very appropriate…profound, even?

In my opinion, the best Tarot decks are born out of depth—of knowledge, suffering, or life experience. I can spot a shallow deck (or a shallow creator) pretty quickly.

So, it wasn’t a huge surprise to discover that the Art of Life Tarot creator, Charlene Livingstone, turned to Tarot during a very dark time: her husband’s Alzheimer diagnosis in 2005. Although she sought meaning and comfort from this external source, what she found—like many who “go deep” with Tarot—was that her empowerment came from within, especially as she observed changes in herself. 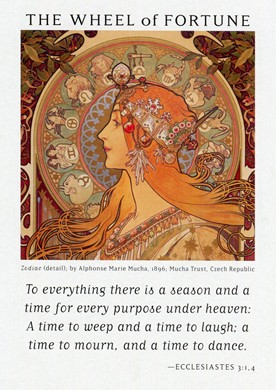 After a symbolic, synchronistic dream involving the Knight of Wands, she realized her unconscious was prodding her to take action. Armed with an unusual, singular certainty that she would create her own Tarot deck, Charlene merged her two loves in the endeavor: art and quotations.

I then turned back to the cards, slowly gazing at each painting from some of the greatest artists that ever lived—van Gogh, Klimt, Homer, Renoir, Monet, Pissarro, Cassatt, Rousseau, Cezanne, Degas and so on—and the absolutely perfect quote Charlene chose to pair with the image.

I marveled at the Art of Life Tarot.

Trust me, this isn’t something I do often, especially after seeing, owning and handling hundreds of decks.

Here are some of the paintings and quotes Charlene chose for her deck:

DEATH Death and Life by Gustav Klimt: “Death twitches in my ear. ‘Live’, he says ‘I am coming’”. – Virgil

TEMPERANCE Woman Washing Her Feet in a Brook by Camille Pissarro: “The unlike is joined together, and from differences results the most beautiful harmony”. – Heraclitus

THE TOWER Dreadful Parachute Drop by unknown French artist: “What does not destroy me, makes me stronger.” – Friedrich Nietzsche

JUDGMENT Moon by Thoma Hans: “The universe is transformation; our life is what our thoughts make it.” – Marcus Aurelius

SIX OF CUPS The Red Kerchief of Mrs. Monet by Claude Monet: “God gave us memory so that we might have roses in December”. – Sir J.M. Barrie

NINE OF SWORDS Head of a Young Woman with Tousled Hair or, Leda by Leonardo da Vinci: “The longer we dwell on our misfortunes, the greater is their power to harm us.” – Voltaire

EIGHT OF WANDS The Violet Wave by George Lacombe: “Nothing ever is, but all things are becoming. All things are the offspring of flux and motion.” – Plato

KNIGHT OF PENTACLES Madame Miriam Fried by Edouard Vuillard: “The secret of success is constancy of purpose.” – Benjamin Disraeli The Art of Life Tarot can certainly be used for divination, no doubt about it. But I feel that its greatest gift may very well be daily card draws or active contemplation. Fortunately for us, publisher U.S. Games Systems, Inc. makes this practice both easy and attractive with a built-in display frame.

Just flip the sturdy hinged lid and slip the card of your choice in the slot—right between the decorative gold frame and the box cover. Then, gently push the framed card backward to the raised lip…and you now have a portable visual meditation that’s also decorative.

In fact, if you wanted, you could even put some crystals, talismans, charms, slips of paper or other small meaningful objects in the box to create a small altar or meditation focus. Whether for divination, contemplation or inspiration, the Art of Life Tarot will uplift and empower you—exactly as the creator of this deck intended.

To see 18 more images from this deck, click here.

-- Janet Boyer, Amazon Hall of Fame/Vine Reviewer, author of Back in Time Tarot,Tarot in Reverse and the Snowland Tarot (Schiffer 2013). Featured in Tales of the Revolution: True Stories of People Who Are Poking the Box and Making a Difference (A Domino Project eBook edited by Seth Godin)

That really does sound like a beautiful and inspirational deck! I love the Van Gogh one; his work always elicits a strong reaction from me.

Are you still going with the A-to-Z?

Shannon at The Warrior Muse, co-host of the 2012 #atozchallenge! Twitter: @AprilA2Z

Hi Shannon! Thanks so much for stopping by. There's a few van Gogh's in this deck! :o) Yep, still doing A-Z...just got behind. *wince*