Although my Tarot Classrooms closed its virtual doors a years ago, I still get emails from people begging asking me to teach them Tarot.

I'm flattered, and truly wish I could help seekers in a more personal, intensive way. But I just don't have the time, and my temperament is more of a Creator/Writer and Teacher, rather than a Mentor (it may not seem like it, but the energetic difference between Teacher and Mentor is vast). 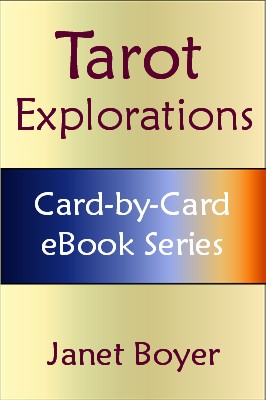 In every email, frustrated folks complained to me that Tarot is overwhelming and intimidating...especially with so many books and decks on the market. Where to start?

Believe me, I hear you! I taught myself Tarot about a decade ago, and it was pretty much all on my own. Informative, accessible Tarot blogs were few and far between then. And, living in a rural area, I had no clue which Tarot books were best (believe me, you can't trust some of those reviews on Amazon...but that's another blog post).

I do believe I now have an inexpensive (99¢!), accessible, entertaining and informative option for those of you who want to learn Tarot in bite-sized pieces: my new Tarot Explorations Card-by-Card eBook series.

In each eBook, I cover one Tarot card at a time with my 7 Clue Tarot Method (the basis of my Tarot Classroom), as well as extensive keywords, esoteric correlations, symbolism, affirmations and more.

I'll be listing each eBook here as it becomes published. I'm thrilled to announce that on April Fool's Day, today, The Fool eBook is now available! Click here to go straight to Amazon to get your copy for Kindle for only 99¢.

At last, I can now say to hopeful seekers, "Yes, I can teach you Tarot. And I can do so card-by-card, so you can refer to each eBook again and again--learning at your own pace, in the comfort of your own home...or anywhere you enjoy reading your Kindle."