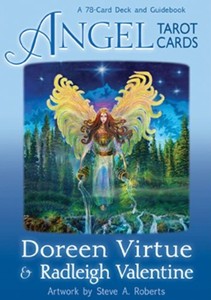 "Tarot has touched the lives of countless individuals, giving them peace, comfort, and insight in times of joy as well as in times of challenge. It's one of the most accurate ways to receive detailed guidance about your future and answers to your questions. Consulting tarot cards is like spending time with a dear wise relative who acknowledges both the shadows and the joys of life." - From the companion book to the Angel Tarot

I'm in a unique position to write this review because I not only use Tarot decks, but also oracle decks. I own every Doreen Virtue deck made thus far, and have reviewed over 100 oracle decks. Yet, I'm also a Tarot expert with two Tarot books to my name, various Tarot eBooks and my own Tarot deck-in-progress with my husband (Snowland Tarot)--as well as an international group Tarot blog.

I'm stating this information to give you a sense of where I'm coming from, because strict angel oracle users may not touch a Tarot deck with a 20 foot pole because of the (erroneous) bad press Tarot has gotten. On the other hand, hardcore Tarot uses may not touch a Virtue deck with a 200-foot pole--feeling her work is shallow, fluffy and virtually worthless.

Well, I'm here to tell you that:

1. Tarot isn't evil or "dangerous" (why Doreen even uses the word "safe deck" to describe Angel Tarot is beyond me).

2. These cards have merit as a Tarot deck. In fact, the Angel Tarot surprised me with is ability to speak deeply and accurately.

3. Angel Tarot is a perfect bridge between Doreen's angel oracle decks and the Tarot...especially for those completely new to the latter. 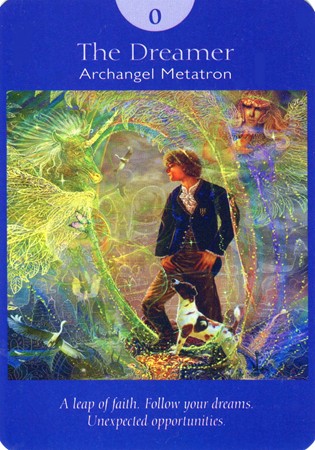 The Major Arcana retains most of the usual card names, except:

Lest you think that the card renames are too gentle, I can assure you that the authors have captured the essence of traditional Tarot. For example, Life Experience cautions about rapid, inevitable change...or that time is running out. For Ego, the authors warn that there's an unhealthy focus on material possessions or accumulating more "stuff", gently pointing out that this behavior likely stems from feeling (and trying to fill) an emotional void.

The 133-page companion booklet to the Angel Tarot, co-authored with Radleigh Valentine, is quite good--better than most Little White Books that come with Tarot decks. Because I've read (and written!) so much about Tarot, I didn't expect to discover much new in the book--expecting only trite meanings and the very basics.

Yet, the authors pack a lot of great information in the companion book, including situations, meanings, people and keywords associations for the cards. The Court Card meanings are especially well done, with relevant, pointed descriptions and definitions (their designations are Page, Knight, Queen and King). 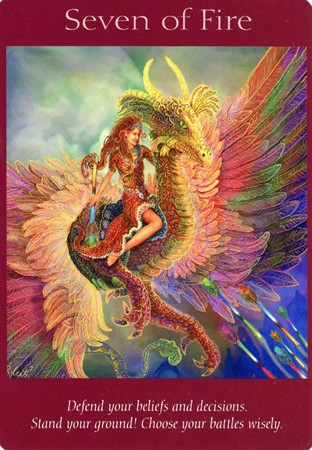 The images of the Angel Tarot cards are vibrant, striking and pretty--akin to the very best artwork from among Doreen's other decks. However, quite a few cards are also repetitive, which not only doesn't make sense, but is also a huge disappointment (especially since many Tarot enthusiasts rely on artistic differences to glean intuitive insights from the cards).

For example, most of the Water suit cards (usually known as Cups) looks the same: various golden chalices scattered at the bottom of blue, watery depths with translucent merpeople floating around. The Wheel of Fortune and The World feature the EXACT same male figure in both (even the same stance), and he's also on the card backing.

The Air suit cards, represented by unicorns, are also a bit repetitive, showing a bunch of horned creatures in a meadow for several images.

However, the images within most of the Angel Tarot are not only beautiful and detailed, but can also be used to cull accurate impressions and messages. To further aid readers, there are helpful key phrases at the bottom of every card. For the Court Cards, there are also keywords at the top, while the Major Arcana depicts card numbers (Justice is 8 and Strength 11 in this deck), as well as the angel related to the card (for example, Archangel Uriel correlates to The Sun, while Archangel Metatron connects to The Chariot).

Unlike many of Doreen's oracle decks, the  Angel Tarot does NOT have gold edging. And, because the cards are quite thick and there's 78 of them instead of the usual 44, it's a bit of a challenge to shuffle them hand-over-hand (but the "finger painting" method works great!).

I've used this deck several times already, and have been surprised at the accuracy of my readings. My husband and son tried the deck out, too, and each drew cards that spoke directly to the situation they asked about. For my husband and I, the image, itself, also provided additional intuitive insight apart from the key phrases and traditional meanings we've come to associate with the cards. 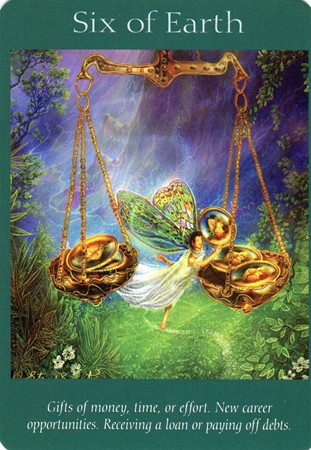 The companion book to the Angel Tarot includes the Celtic Card spread, as well as the usual instructions on how to consecrate and clear a deck. The upside down cards in a spread, also known as reversals, aren't addressed in this book (if you want to learn more about the value of reversals, try my book Tarot in Reverse: Making Sense of the Upside Down Cards in a Tarot Spread from Schiffer Publishing).

If the borders of the Major Arcana and Air suit weren't similar in color, and if about a dozen of the images weren't so repetitive, I'd say the Angel Tarot was on par with the best of them. Admittedly, though, compared to some Tarot decks being produced, it's definitely a cut above most. (Doreen as the 9 of Water is a bit tacky, though.)

If you're curious about Tarot but have only used Doreen's other oracle cards, the Angel Tarot will provide a good bridge for you--especially with the key phrases printed right on the cards. If you're a Tarot enthusiast who loves angels, unicorns, mermaids, fairies and other ethereal creatures, you'll likely adore this deck.

However, if you're a fan of "darker" Tarot decks (Thoth, Deviant Moon, Ludy Lescot, Archeon, Gothic, Vampyre, etc.)--or ones that "hit you in the face" with the unvarnished (and, sometimes, ugly) truth--then I doubt you'll value the Angel Tarot.

To see 15 more images from this deck, click here.

Looks like a wonderful deck. I love Doreen Virtue. I seem to connect really well to oracle decks but I love tarot too. I will have to check this one out.

I gave this deck to my mother as a gift. I was a born a Medium and I'm so lucky that I have a mom whose very intuitive and open minded that she could help me growing up (even if she didn't understand it when I was a child).

I thought this would be a wonderful deck to give my mom who already loves Doreen's oracle cards but feels traditional Tarot is a bit overwhelming for her. Good practice opening up and trusting Spirit, energy, Guides, and God.

Always such beautiful and appealing artwork on her cards.

I would love to create a deck one day too- but will have to stick with self publishing on amazon-ebooks. What a great technology to get work out there tho!