“Together, these cards reveal a path forward. Should you stay in your fallout shelter until the last of your supplies are depleted? Flee to one of the government-sponsored refugee camps? Proceed directly to the Gunz-R-Us? Consult the Zombie Tarot to determine the best course of action. These cards can’t predict the future, but they can offer you much-needed perspective on a situation. Pay attention to your intuition, listen to your instincts, and always, always keep the shotgun loaded.” – From the companion booklet 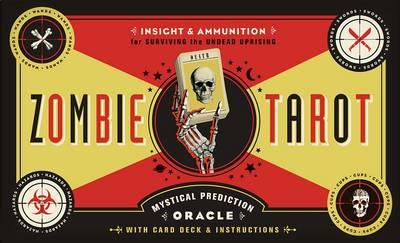 From rotting corpses to severed heads, cannibalistic children to valiant humans fighting for survival, the Zombie Tarot serves up heaping doses of both brawn AND braaaainnnnsss for the twisted seeker. 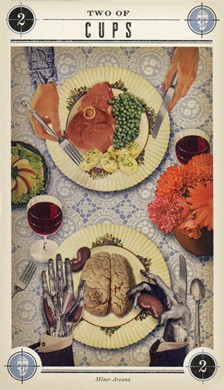 And by brains, I don’t (just) mean the kind served fresh out of the cranium: this deck, conceived by Stacey Graham and illustrated by Headcase Design (Paul Kepple and Ralph Geroni), lurches with wit and shambles with pure entertainment.
But make no mistake: the Zombie Tarot reads clear and sharp for those used to reading the cards. Yes, it’s an actual workhorse deck! (And not just the “work” of escaping limb-eaters or trying to divine your escape route…)
Brought to you buy the same publishers who created the domestically awesome Housewives Tarot (Quirk Books), the Zombie Tarot is every bit as funny, but—dare I say it—is even MORE brilliant!
Framed by what looks like yellowed, old-fashioned newsprint, each card of morbid hilarity offers traditional names for the Major Arcana, while the Minor Arcana finds expression through Cups, Swords, Wands and Hazards (Coins). The Court Cards are Pages, Knights, Queens and Kings (love that rifle-toting Queen of Swords grandma luring zombies with a well-heeled ankle smack-dab in the middle of a bear trap!).
The 96-page companion booklet offers five spreads, as well as three keywords and brief interpretation for each card (the “ads” in the back are too funny!). Labeled “Prediction and Protection”, the sturdy Zombie Tarot container will serve you well…since it doubles for a box of shells!
Here are a few card descriptions to give you flavor of this fantastic flesh-fest: 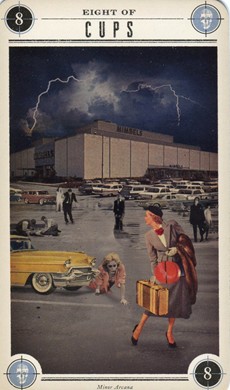 Justice: Impartiality*Fairness*Equality – “An eye for an eye and a tooth for a tooth” takes on an entirely new meaning in the midst of a human-zombie war. Thankfully you can count on Justice to right the wrongs, restore harmony, and offer a karmic slap to the back of the head to those who deserve it. Fight the good fight—don’t be on the other end of that slap.
Six of Cups: Nostalgia*Memories*Old Flames – Ahh, the carefree days of childhood! No zombie plagues, no hiding in abandoned houses, and your best friend was always at your side. Well, there’s good news: someone from your past may soon arrive for a visit. Just don’t mistake a friendly kiss on the cheek for a zombie gnawing off your face.
Eight of Wands: Travel*Expansion*On the Move – Faster than you can say…well, most anything, since you’ve lost your tongue, you’ve been presented with a new opportunity. Travel is imminent, so choose a path to stagger along and enjoy the occasional human morsel as you go. If you take charge, others will follow your lead. Trust your inner zombie and roll with it. Good news is coming. Brace yourself for awesome.
While the companion book is whip-smart, the images, too, show depth of Tarot knowledge. The Queen of Swords is often known as the “silver-haired widow card”, so it’s no surprise that our gun-wielding granny waits patiently in her green armchair. The 4 of Hazards, usually referred to as the “miser card”, shows a smug human surrounded by food staples—fingers in his ears to drown out the cries of his fellow survivors outside, desperate for sustenance. 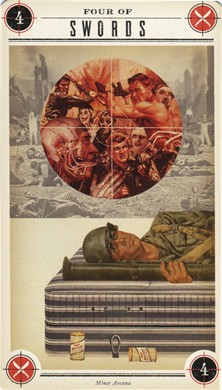 Justice’s scales carry a brain on one side and a heart on the other, the balance decidedly in favor of the mind (as Justice usually tips). The zombie gal on the 8 of Wands chases her prey on roller skates, a clever nod to the “speed” of this card. Temperance shows its alchemical roots with a bloody microscope slide and syringe. And the 3 of Swords? Let’s just say this card brings new meaning to “eat your heart out”….
Every Tarot lover must have the Zombie Tarot, pure and simple. It satisfies on every level: artistic, esoteric and divinatory. Yes, it’s a riot and yes, it’s gross—but it’s a solid reading deck for those familiar with the cards. Even if you’re clueless about the Tarot but love zombies, this is one purchase that should be a no brainnnnnn-er.
To see 18 more images from this deck, click here.
-- Janet Boyer