“Why are we fascinated with ghosts and spirits? If they aren’t real, then why do they persist in our consciousness? Ghost stories and tales of the supernatural can be found around the world and many cultures still propitiate spirits as part of their belief system. The possibility that somehow our essence continues even when our bodies do not is a compelling idea.” – Lisa Hunt, from the companion book to the Ghosts & Spirits Tarot 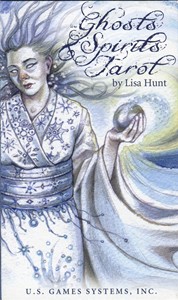 Theoretically, I should love this deck—references to The Fall of the House of Usher, A Christmas Carol, Macbeth, Day of the Dead…even Jack Frost, a Snow Ghost and a frosty Wild Hunt—but the execution leaves me cold (and not in a good, or intended, way).
I’ve had the Ghost & Spirits Tarot for months, but as with any deck I don’t like at first sight, I’ve given it a chance to grow on me (and sometimes, such decks do…the Gaian Tarot, for example). Unfortunately, after contemplating its imagery on and off—and attempting several readings—its ghastly cards now repulse me even more than at first blush.
From the horrid Snow Ghost gracing the deck’s cover (what a bad choice—she looks like she’s stone-cold drunk with that red nose!) to dripping spirits with gaping maws, there’s not much attractive among these cards.
Intricate detailing on twisted roots, luminous swirls and “hidden” faces edge out the central figure of most cards, and this hyper-focus on framing and long shot views dilute the potential power of each image.
As with Lisa Hunt’s past decks, 80% of the figures are pasty, sleepy-eyed Germanics with the token Kris Waldherr look-a-like thrown in (2 of Wands) and several Orientals. Where is the skin-tone variety? The sense of “in action” tableaus rather than the frozen poses? I loved that her last deck, the Fairy Tale Tarot, seemed to take more artistic chances (more realism and bold colors)—so this deck’s dreary tone and hues are a particular disappointment to me. 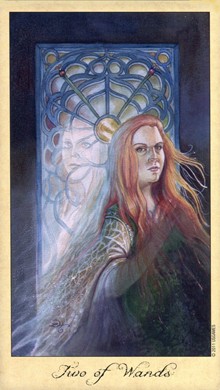 I feel there’s way too many skeletal figures (and skeletons) in this deck. What, no spirit in the afterlife dare be Rubenesque? Why not? And, since when are ghosts or spirits mostly the (literally) bare bones of leftover humanity—rather than their “essence” that Hunt claims to want to capture?
The Aces are surprisingly busy, not reflecting the singular possibility that they often hold. However, I love the Ace of Swords card—a figure contending with a poltergeist throwing items like a basket of apples, books, a broom, wide-brimmed hat, flasks, umbrella, kitchen items, hair brush and so on—but the energy feels more like a 7 of Cups card rather than an Ace.
And, truth be told, several of the cards feel like their were titled as an afterthought (“I want to create this painting—what card title can I force it into?”). Some don’t even seem to fit the deck or are incomplete (e.g. Judgement). The art feels homogenized, lacking contrast in color or texture. In fact, many of the images look as if water was dripped on the canvas, and a brush downward stroked for a “leaky” effect.
I love cards that tell a story, but the 75% of images in the Ghosts & Spirits Tarot don’t seem to say anything but “tormented”, “haunted” and “soulless”. How can that fare well as a good reading deck? It’s impossible to put a positive spin on most of these cards; it feels like a deck stacked with 9 of Swords imagery (the “nightmare” card). 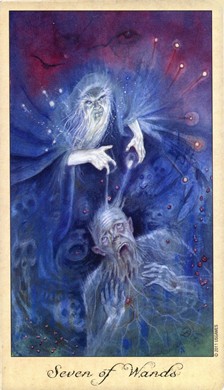 There’s one “bonus” card in the deck, which Hunt says she included “for questions that require deeper reflection”. In actuality, she painted two contenders for the 4 of Swords card and asked her Facebook fans which one they liked most. Since they both got a good amount of votes, U.S. Games Systems decided to include them both in the deck—but instead of two 4 of Swords cards, the “bonus” card is thrown in with no title. (Which is yet another reason I have to wonder if, for this deck, she just painted what she wanted and then surmised: “Hmmm. What card should I shoehorn this one into?)
I mean, The Moon card doesn’t even feature a Moon—or any water, tides, femininity...theme associated with this powerful card. Instead, it’s painted in all warm hues with a decidedly earthy feel (60% gnarly tree roots and a narrow stone path).
A 59-paged booklet accompanies this deck, featuring mythological or symbolic considerations and divinatory meaning. One basic 5-card layout is included, a Realm of the Spirits that’s merely Past, Present, Future, Joys and Fears—but good luck on deriving meaning for the “What lifts your spirits?” position based on the cards in this deck. Suits are Wands, Cups, Swords and Pentacles, with the Court Cards following the Page, Knight, Queen and King designation. The card backing depicts three, white cartoon-like swirling ghosts—and image that not only doesn’t jive with the aesthetic of the rest of the deck, but is also non-reversible (but close). 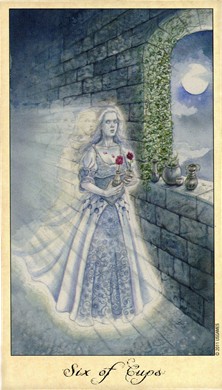 So much could have been done with the subject matter—so many freakin’ cool possibilities—but alas, just washed out, ghastly images that leaves me feeling that the Ghost & Spirits Deck is “the nightmare deck”…stacked mostly with variations on the 9 of Swords theme.
And let me be clear: I am NOT against “dark” Tarot decks nor find them lacking benefit. In fact, the majority of such decks on the market are not only attractive and evocative, but also darn good reading decks (e.g. Deviant Moon Tarot, Zombie Tarot, Dark Grimoire Tarot,Tarot of the Vampyres, etc.).
But “dark” doesn’t have to equate to depressing, morbid, bland or ugly which, I’m afraid, describes this deck rather aptly.
To see 18 more images from this deck, click here.
-- Janet