From Christmas Tarot to Snowland Deck 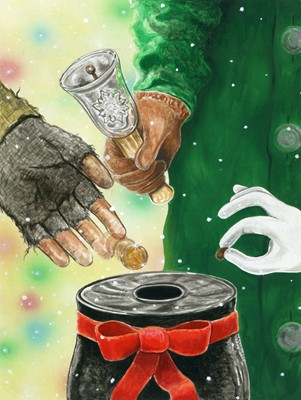 6 of Coins (6 Green Material Suit) from the Snowland Deck. Art by Ron Boyer.
I had always wanted a Christmas Tarot.

I couldn’t believe no one had ever thought of it, let alone attempted to make one (at least, at the time, I could find no mention of such an idea—not even on popular Tarot Forums).

So back in February 2009, I decided to do what many wise sages and art coaches recommend: create what you want to see in the world.

But I needed an artist.

My husband worked, and still works, a full-time job…so I didn’t even think of asking him if he’d like to do it.

So I decided to ask my then-friend Lisa Hunt if she’d like to collaborate with me on that project, to which she enthusiastically agreed. (At the time, she was already working on the Fairy Tale Tarot and the Ghosts and Spirits Tarot. She’s quite the deck factory!).

I started to script the entire Christmas Tarot, all 78 cards—images, keywords…the works. It took me only about a week or two.

While I was working on the script for the specific images I “saw” for this deck, Lisa went ahead on her own and created a painting for my approval—the first in a set of five or so paintings we would send to publishers with our submission packet.

She submitted a lovely image of snow sprites pulling at a woman’s hair…her idea for the 7 of Cups. 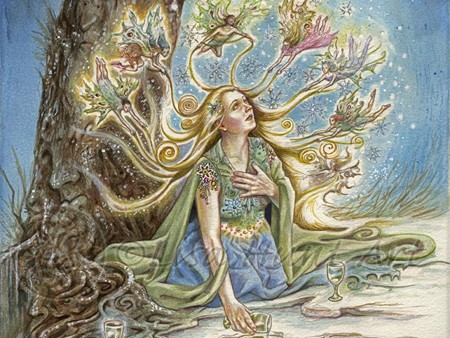 Despite the image’s beauty, it simply didn’t work for a Christmas Tarot.

As I told her, this card might work for a Winter Tarot…but, alas, not a Christmas Tarot. There was nothing outright Christmas-y about this image (and it needed to be for a true Christmas Tarot).

My rejection of the image led to her decision to discontinue her work on the Christmas Tarot project. I guess she had her own ideas for the deck, but since it was my vision and commission (that we hadn’t really even got a chance to discuss at length, because she just began painting her 7 of Cups idea, on her own, without asking)—I felt that the images needed to stay within a specific milieu. After all, this was the Christmas Tarot…not the Winter Tarot.

Simply put, there are certain expectations from Tarot enthusiasts and art lovers when you include the word “Christmas” in the title.

In Lisa’s submission for the water-themed 2009 Tarot World Magazine’s Articles and Spreads (that never saw publication and for which I was the editor), she wrote about this image:

The Seven of Cups has always been one of my favorite cards. I suppose this is because I'm a dreamer and paint dreams. I am definitely organized-challenged and constantly find sundry tasks reminding me of what I should be getting done instead of painting. But then I find myself drifting back to the sketchbooks and paints with that incessant need to explore the mysterious inner workings that have manifested in my artwork over the years.

This particular rendition of Seven of Cups is a “fine arts” tarot piece. There is even the possibility it will end up in a future deck (an idea I'm working on with my friend Janet Boyer). Symbolically speaking, I find myself in this lady's situation all too often. She is in the middle of filling her cups from an unfrozen pool as snow fairies vie for her attention. She is torn between focusing on her task and acquiescing to the desires of imaginative thinking. The fairies embrace locks of her flowing hair with their magical touches while spirits of the trees look on. The lady is being lulled by the comfortable presence of the fae as her garments begin to assimilate into the environment. The tree roots encircle the cups and infuse them with magic, making the return to "reality" more and more difficult. The woman's reflection in the pool is her conscience, a reminder that she still has a job to do.

But alas, our collaboration wasn’t meant to be. 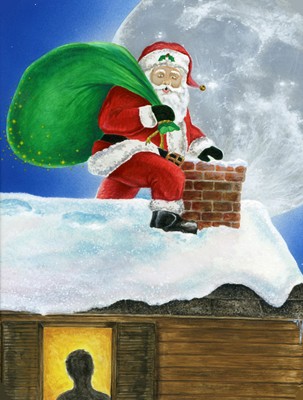 7 of Swords (7 Gray Mental Suit) from the Snowland Deck. Art by Ron Boyer.
While the Christmas Tarot may still see publication some day (I still get requests for us to do it!), I was thrilled that my husband, Ron Boyer, agreed to collaborate on a winter-themed deck with me. He was more excited about exploring a wider thematic scope, beyond just Christmas, and I readily agreed to this new permutation on my idea.

He had painted Santa on the roof as The Moon card for the Christmas Tarot, but as we discussed going beyond just Christmas—and after U.S. Games Systems turned down our submission saying it was “too narrow a market” in an already niche publishing venue—we decided on a winter-themed deck.

Thus, we now have our sparkling, innovative Snowland Deck! It's been a true honor to collaborate with my husband; he's quite the talented guy (but I'm biased!). I love seeing how he takes my ideas and suggestions, bringing them to life--and, oftentimes, adding his own special take on an image.

And that Santa on the roof card? It’s now our 7 of Swords, or 7 Gray Mental Suit in the Snowland Deck designation.

Just like The Moon card of Tarot and what it represents, there are many hidden stories behind big ideas and projects—and I thought I’d share this one with you.