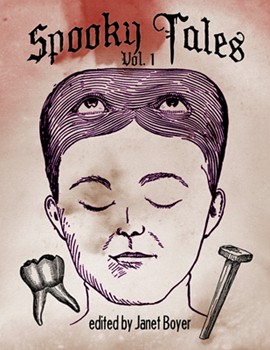 I’m pleased to introduce you to five entertaining short stories that have five things in common: each contains the words tooth, rust, cope, ghost and whippersnapper. Among the submissions, I chose five of the best tales to include in this anthology.

As an editor, it’s a fascinating process to read different stories—all required to use the same five words—and watch how each author decides to use those words. It would be easy—lazy, really—to just toss in the mandatory words as one would throw parsley on top of spaghetti as a decorative afterthought.

From Craig Conley taking amusing liberties with the word whippersnapper in his tale “The Toothsayer” to Jennifer Wheeler’s stomach-turning placement of tooth in “A Bird Named Murder”, each of these authors offer considered and surprising uses for the five required words.

They read like meat, not like garnish. Something you can sink your tooth into, so to speak.

Speaking of meat, wait until you read about the delicious “meatcakes” in Ron Boyer’s “The Discovery”…

Well, I’m getting ahead of myself! As you can see, I’m very excited to present these five short stories to you—five entertaining reads that will leave you feeling off-kilter and, hopefully, spooked enough to want more from these talented writers.

Click here to borrow or buy your Kindle copy from Amazon.com. Enjoy!