The Devil and Materialism (Quotes and Tarot Cards)

I love it when I'm reading a book and a passage just jumps out at me, brilliantly capturing the energy or import of a Tarot card. 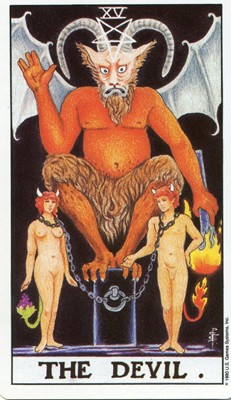 When I read this, I immediately thought of The Devil:

Gurney made his way back to the parking area. A foursome of golfers in traditional plaid pants and V-neck sweaters were just getting out of an oversize white SUV that reminded him of an upscale kitchen appliance. Normally the thought that someone had paid seventy-five thousand dollars to ride around in a giant toaster would have made him smile. But now it struck  him as just one more symptom of a degenerating world, a world in which acquisitive morons were conniving endlessly to amass the largest possible piles of crap.

It could be said that the maxim "Too much is never enough" encapsulates the energy of The Devil. While the 9 of Cups may indicate temporary gluttony or drunkenness, The Devil--as a Major Arcana card--symbolizes the archetypal pattern of bondage, addiction and self-debasement that permeates a life for years.

Sometimes (oftentimes?) this archetypal pattern is passed down through generations--whether through nature (genetics) or nurture (environment)--as "sins of the father".

And how's this for irony: it wasn't until I was about to type this post that I realized the title of the book I quoted from above is Let the Devil Sleep (I kid you not). It's book #3 in the retired detective Dave Gurney series by John Verdon.

Care to share a quote that captures the essence of The Devil card for you? What about a passage you've recently read? I'd love to hear about it in the comments section.

Image of The Devil Tarot card from the Universal Waite Tarot