The Monster Who Did My Math


"There once was a time I was frightened by numbers.
They scared me at school, and they haunted my slumbers.
My brain had some kind of allergic reaction
To multiplication...addition...subtraction.

My blood would run cold at the thought of division
And decimal point would put spots in my vision.
But now I see math from a new point of view.
This is my story. I swear it's all true." - From the book (Hardcover, 30 pages) 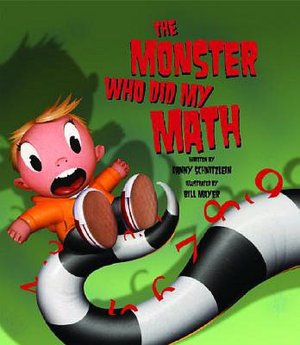 When the clock strikes twelve with hollow tones, a monster appears to an arithmetic-phobic boy. With red horns, black cape and pencilly fingers, the monster offers him a contract, guaranteeing that he'll do all the boy's dreaded math homework.

The boy receives several As on his math homework...but what happens when he's called upon in class to solve a problem on the chalkboard? More importantly, will he have the math skills to "pay up" what's owed the monster?

With brilliant, clever rhyming verse, award-winning author Danny Schnitzlein shows what happens when kids become lazy thinkers and attempt to take short cuts with their homework in his book The Monster Did My Math. Reminiscent of TV cartoons from the 30s, exaggerated and lively art by Bill Mayer adds up to a hilarious, but instructive, tale on why math is important.

A fantastic tale for numerically-adverse kids, The Monster Who Did My Math shows the all-too-real cost of not knowing how to do simple math--and how perseverance may not only result in mastery, but also actual enjoyment.