Trick or Treat on Monster Street 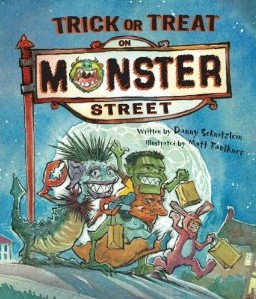 "I used to be a scaredy cat
afraid to sleep in my own bed.
Late at night, when things went bump,
I'd conjure monsters in my head.

My brothers knew my weakness well.
Every time they got the chance,
They'd think of ways to make me scream,
And laugh when I would wet my pants." - from the book (Hardcover, 29 pages)

Created by the same team that made the award-winning The Monster Who Ate My Peas (author Danny Schnitzlein and illustrator Matt Faulkner), Trick or Treat on Monster Street tells a "turning-the-tables" story about fearful boy forced to go Trick or Treating with his two older brothers.

Stopping to tie his shoe, when he stands up, he realizes he's all alone.

With trees ripping at his costume, he wanders blindly through the dark--until he ends up on Monster Street. He begins to trick or treat, but knows something is amiss when he receives a smelly trout from one house...and some spiders from another.

Coming upon another trick-or-treater, he thought the kid didn't look quite right...confirmed when its green fingers peel off the "human" face!

This book encourages diversity via not judging by appearances, with a good dose of sibling revenge when the older brothers see what he brings back from trick-or-treating on Monster Street.

The verse in Trick or Treat on Monster Street reads clunky compared to Schnitzlein's The Monster Who Ate My Peas. In addition, the illustrations--while much more colorful and varied than in The Monster Who Ate My Peas--lacked that "shiny" realism until the last few pages of the book...making most of the pictures look hurriedly drawn by comparison.

The "monsters who are afraid of humans" is a familiar trope, but when the human kid befriends monsters--and they help him get revenge on his tormenting older brothers--it adds a nice twist...especially as the kid loses a lot of his fears.

Trick or Treat on Monster Street is an OK book, but there are better Halloween-themed ones out there for kids.