“How often have you wondered what your dog is thinking? Who hasn’t stared into Lily’s innocent eyes, questioning why she shreds your socks but ignores her fuzzy designer toys. Or why Duncan casually lifts his legs and glares at your new boyfriend whenever he walks into the house. If you’re still asking the eternal question, ‘When my sweet, loving, brilliant, messy-muzzled Canis familiaris grows and wags her tail at the same time, which end do I believe?’ then you need The Original Dog Tarot.”

Several stellar, quirky Tarot decks out there grace the Body/Mind/Spirit market, campy cards that manage to be funny, silly, outrageous and relevant—all at the same time. While not everyone’s cuppa, these decks have delighted both collectors and serious Tarot readers—among them, The Housewives Tarot and Zombie Tarot (both by Quirk Books).
There are also plenty of niche Tarot decks catering to lovers of cats, fairies, dragons, angels, aliens, spiritual paths, geographic locations, art styles and more. None, that I know of, has catered to dogs…until now.
Or, so I thought.
Thrilled to see—finally—a Dog Tarot, I pounced at the chance to buy one as soon as it hit the market. Because there’s no thorough description of this deck, The Original Dog Tarot, I assumed that I would be getting a bone-a-fido Tarot—78 cards (or close to it).
Imagine my utter surprise and disappointment to find out that The Original Dog Tarotcontains ONLY 30 cards—far less than the even average non-Tarot oracle decks (which usually contain at LEAST 44 cards). 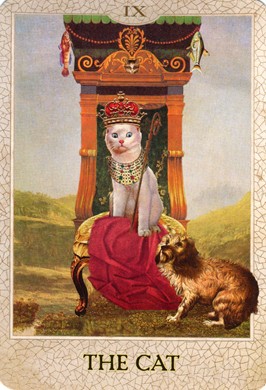 Not only that, there’s not even a full Major Arcana (22 cards)—and the numerical order doesn’t even follow a traditional Tarot deck. The Major cards are:

I      The Fool
II     The Magician (Nostradogus)
III    The Kibble
IV   The Hydrant
V    The Pack
VI   The Auricle
VII  The Moon
VIII The Sun
IX   The Cat
X    The Dogcatcher
XI   The Wanderer
XII  The Chariot
XIII  The Couch
XIV The Hangdog
XV  The Shelter
XVI  The Runt
XVII The Wheel of Fortune
XVIII Justice
And The Minor “Barkana” of The Original Dog Tarot? Only three cards to each of the four suits (bowls, bones, biscuits and leashes)—Ace, Three and Seven. These cards aren’t “animated”, only showing 1, 3 or 7 items of the suit. Supposedly, the Aces refer to the “human”, the Seven to the “canine” and the Threes a balance between them. Each suit, in its brief entirety, is described in the equivalent of one booklet page. Based on the brief suit descriptions, those who are familiar with Tarot will recognize the connection between bowls/cups, biscuits/wands, leashes/swords and bones/coins…but actual references to traditional Tarot correlations are non-existent.
The author tries to be clever, but bears no resemblance to the knowledgeable, witty writers of the companion books to campy decks like the Housewives Tarot (who actually have a respect and familiarity with the history and traditional design of the Tarot).
For example, here’s an example of a One-Card Draw Reading from the companion booklet: 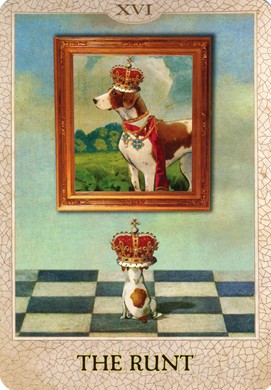 “Jannie bought her enchanting Corgi mix, Bean, a dazzling Halloween costume but wasn’t sure she should make her wear it. Janine knew Bean would look fabulous in her flowered headdress and matching tutu, and would enjoy the resulting attention. But friends said it was ridiculous to dress a dog like a doll. Conflicted and confused, Janine asked the Dog Tarot, ‘How would Bean be impacted by dressing her for Halloween?’ She drew a single card: The Runt (XVI), the card of transformation. It suggested that every dog had a special gift waiting to be unleashed. For Jannie, the message was a sign to dress Bean and go trick-or-treating with the neighborhood children. In costume, Bean was beguiling, floating down the street, pleased and proud. People gathered in admiration, and soon she’d collected more treats than the children. At home, an exhausted and radiant Bean fell into a deep, happy sleep, sighing, dreaming of next year’s Halloween. A star had been born. The truth was in the cards.”
Okaaaay…
I firmly believe that tools like Tarot can be used to not only connect with our pets, but also to help “diagnose” behavioral problems or ways to enrich the lives of our furry companions. I believe that animals are sentient, and that pets are an incredible blessing to humans.
Which is one reason why this Dog Tarot rubs me the wrong way.
I almost get the feeling that the creator, Heidi Schulman, is mocking those who use Tarot cards for insight into animals…or any other situation. It’s clear that she loves dogs, make no mistake, but it appears she has little knowledge of traditional Tarot constructs. Granted, some of her Major “Barkana” interpretations, while shallow, do resemble their traditional Tarot counterparts…even if the numbering system deviates wildly from usual decks.
And lest you think I take Tarot “too seriously”, just re-read what I’ve written. A Zombie Tarot? Hell yeah! Housewives? Love it! A Halloween Tarot with Frankenstein, a mad scientist and fire imps? One of my favorites!
But what each of those have in common is an intelligent reflection of familiar Tarot constructs, while still taking traditional ideas “out of the box”. Not to mention that those decks also contain 78 cards. 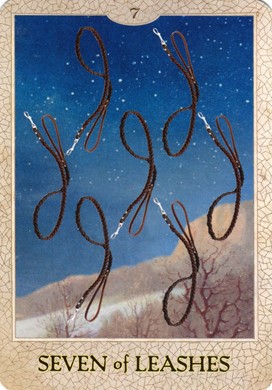 Which brings me to the idea: What IS Tarot? MUST it be 78 cards? Personally, I don’t think so. I consider Lucy Cavendish’s Oracle Tarot a Tarot deck, even though she removes the 16 Court Cards. John Holland’s Psychic Tarot also is absent the 16 Court Cards, as well as the Minor Arcana 10s, and he adds 7 Chakra Cards to the mix.
But I consider them both Tarot because they retain the 22 Major Arcana cards, as well as the majority of the Minor Arcana—with both containing over 60 cards.
But a 33-card deck with a Major “Barkana” containing only 18 cards (most deviating a good deal from traditional numbering)—and a Minor “Barkana” of 12 cards?
No way.
This deck should be called the Dog Oracle, pure and simple. When you call a deck a “Tarot”, it comes with certain conventions and expectations.
In short, I’m glad I only paid 10 bucks for this deck. I’ll be giving it away first chance I get. Heck, maybe my 14 year old will want it as a novelty.
And, truly? I feel that’s the only thing this deck is good for in terms of Tarot collectors/readers: a novelty for dog lovers. The art is cute, especially for the Major “Barkana”, as is the card backing design. But for those who like oracle decks and canines, this "original" Dog Tarot may very well be just what the veterinarian ordered.
To see 9 more images from this deck, click here.
-- Janet

The seven of leashes! Have you told EL James about this one?