Jingle Bells: How the Holiday Classic Came to Be

"As he walked up the aisle of his church, broken glass crunched beneath his boot. He spotted a brick on a nearby pew. "Not again", he sighed. "Lillie, be careful."

"Why would anyone break our windows?" his daughter asked. "Well, some people don't like our church because we don't believe in slavery", Mr. Pierpont said. "Someone is probably angry because our congregation has four members who once were slaves. Four members who are much more likely to go to heaven than the person who threw that brick, I might add." - From the book Jingle Bells: How the Holiday Classic Came to Be (Peachtree Publishers) 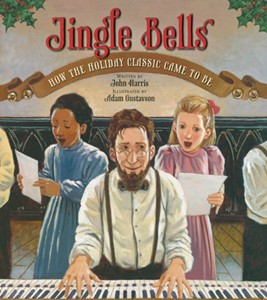 Attempting to recreate the sound of sleigh bells from his native Boston, John Lord Pierpont climbed the stars to the church pipe organ and began to plink out some notes. He begins to sing "jingle bells, jingle bells..." and, recalling that his parishioner Mrs. FitzHugh said "oh what fun", realizes he may have the beginnings of a song.

During the sweltering Georgia heat at Thanksgiving time, undaunted by racist vandalism, Mr. Pierpont and the children's choir introduce a new song to welcome the holidays, as was their yearly custom.

Two girls stroll up the aisle shaking strands of bells, and Mr. Pierpont calls down from the organ loft for the congregation to join him in singing the new song One Horse Open Sleigh. When the song is over, the rest of the children throw white feathers in the air as the congregation bursts out in applause.

Although the story is fictional, author John Harris did extensive research in Savannah, Georgia, including interviewing the folks at the Unitarian Church on Oglethorpe Square where John L. Pierpont served as music director. AT the end of the book is a two-page spread relaying some facts about Pierpont, as well as actual photos.

Sumptuously illustrated by Adam Gustavson (Snow Day!), Jingle Bells: How the Holiday Classic Came to Be is a beautifully told tale that not only brings a slice of Christmas history to life, but also lifts the spirits of readers young and old.