The next Tarot card we'll cover in the Tarot Card Meaning for Writers  series is The World.

This post explores the The World Tarot card in light of creative writing and what we could glean from it for character, plot, conflict, setting and more. This post will be added to as additional insights come up.

Let's look at what comes up with the Universal Waite image of The World Tarot card first: 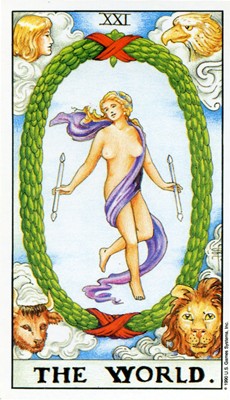 A world traveler. Someone decides to sail the world. World dancer: someone becomes famous for dancing.

Swirling cloth: rhythmic gymnast. Maybe a gymnast suffers a devastating injury because she trips on fabric.

Or maybe someone dances before royalty (royalty=purple cloth), encountering a mishap because of fabric or a costume.

The young man at the upper left reminds me of a troubadour…perhaps with a talking eagle as a mentor?

A dancer on a journey accompanied by three wise/talking creatures: an eagle, a bull and a lion.

Maybe a superstitious dancer will only perform during these four months. Why?

A circus performer? Animal trainer? Zookeeper? Someone like the Crocodile Hunter?

A farmer, ranch hand, or rural youth dreams of being a dancer.

Dancer put in a position where she must comprise her values or dignity. A stripper?

Binding of the wreath reminds me of “foot binding” as detailed in The Good Earth by Pearl S. Buck. Maybe a young woman is inspired to be a social activist on behalf of women residing in repressed lands? Within China?

The World reminds me of “All the world’s a stage”, which is from Shakespeare. Back in the day, men played all parts, including that of women.

Some say the World Dancer is a Hermaphrodite. “Mighty Hermaphrodite” (title of a story/book?). Maybe a character was born as a hermaphrodite. And, maybe the parents chose (and forced) a certain gender—but puberty hits and…

The oval in the center reminds me of a mirror. Maybe a character suffers from a gender identity crisis? “Sees” a girl, although the exterior is “male”? Body dysmorphic syndrome?

The song “We Are the World” comes to mind, which reminds me of the 80s. The AIDS epidemic in the 80s. Someone’s favorite movie is Philadelphia starring Tom Hanks? 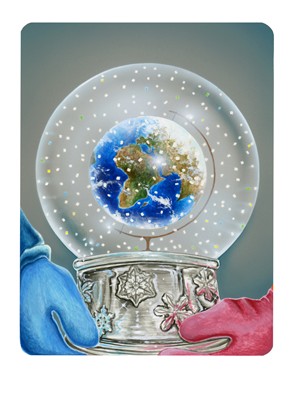 Something to do with snow globes. First thing I think of is "handle with care". Osteogenesis imperfecta comes to mind, aka "Brittle bone disease". This leads me to think of the premise for the movie Unbreakable...and the idea that polar opposites exist in the world as people.

For a unique setting, what would happen if the people in a snow globe came to life?

Maybe a man (blue glove) gives a woman (pink glove) a snow globe. What are the circumstances around this gift?

The central continent showing is Africa. What would happen if it suddenly snowed on the whole African continent? What happened?

Or what about a character who's an artisan specializing in one-of-a-kind snowglobes?

What do you see in this card? Feel free to share your insights in the comments section so we can create a Tarot Card Meaning Database for Writers that everyone to use!