Let's hack the symbolism of the  enigmatic High Priestess Tarot card from the Rider-Waite-Smith tradition. 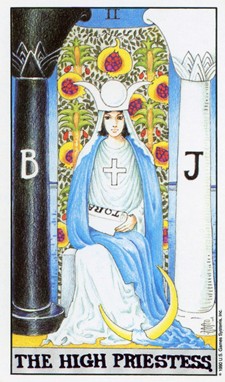 As the number 2, black and white signifies duality—yin/yang, dark/light, feminine/masculine, severity/mercy, passive/aggressive, esoteric/exoteric, heart/mind, intuition/logic and so on. Toggling back and forth, they are "either/or". However, the central veil featuring pomegranates and the date palm tree connects the two pillars—suggesting integration and the union of opposites. The two pillars, when joined by the veil, signify "both".

The Christian cross is not equal-armed, but features vertical lines that stretch longer than the horizontal ones. That particular symbol, known as the Latin Cross and derived from the crucifix, suggests the Divine reaching further towards man in a gesture of reconciliation, comfort or salvation…often through mortal sacrifice. Symbolically, it represents excruciating psychic tension. However, the white equal-armed cross in the Rider-Waite High Priestess, known as the Greek Cross, was a common symbol from the 4th century that indicated the world-wide spread of the gospel.

A more inclusive, mystical interpretation of the equal-armed cross indicates the reconciliation of the psychic angst represented by the Latin Cross, thus making it a symbol of spiritual and psychological integration. The result is not only a sense of peace and well-being, but also of oneness with the Divine—that then engenders feelings of at-one-ment with all beings.

The crescent moon looks like the horns of a cow, which connects this symbol to the cow goddess Hathor. It also signifies the maiden stage of the Maiden/Mother/Crone triple goddess archetype, which also connects to virginal Persephone, Artemis and Mary. In Mesopotamia, the likeness to the horns of a bull connects with the masculine principle of insemination. Jung felt that the boat-like shape of the crescent connected to Ishtar's "Ship of Life", a Babylonian symbol referring to a vehicle containing the seeds of all life. The Christian Madonna (Mother Mary) is often portrayed with her feet on a crescent moon, which would indicate the paradox of "chaste virgin and vessel of divine birth". (Taschen, 30).

The color yellow symbolizes the masculine Sun, which is a paradoxical color for the feminine Moon symbol—also indicating integration of masculine/feminine polarities. Islamic tradition considered bright yellow indicative of good advice and wisdom, while the Chinese used the color gold to welcome fertility. Jungian analyst James Hillman says that yellow connects to the citrinitas stage of alchemy, a transitional phase after the nigredo (black) of chaos gives way to the albedo (white) of contemplation and stillness, on the way to the rubedo (red)— the return to full engagement with the outside world. (Taschen, 644)

The entire lengthy alchemical process—black to white to yellow to red—represents transmuting base metals into gold (and prolonging life), but mystics and Jungians consider it a metaphor for psychic wholeness. Indeed, the famed medieval Philosopher's Stone was an imagined substance that could elevate base metals into gold, the material equivalent of perfection.

Some have connected the white crown on the High Priestess to the Egyptian goddess Isis, but Isis' crown typically shows a throne for a headdress. Thus, a connection to Isis seems rather specious. From appearance alone, the crown looks like three stages of the moon: Waxing Cresent, Full and Waning Crescent. This could be a shortcut for the eight moon phases, signifying endless cycles of birth, death and rebirth. It makes sense to also connect these three moon stages to the idealized Triple Goddess:

Apart from oceans and the sky, blue is the rarest color in nature. Interestingly, Tarot scholar and artist Robert Place once said to me that the pigment ultramarine was used liberally in commissioned medieval art because it was derived from costly stone lapis lazuli. In this light, the blue robe suggests "concealing that which is precious" or even preciousness itself. Mother Mary is often enrobed in blue, suggesting spiritual beauty, purity and transcendence. Note that blue was rarely used in primitive art or among illiterate peoples, but is often connected with the elite (blue ribbon, blue blood, blue-chip stocks). (Taschen, 650) Blue is a calming, meditative color.

Scrolls often symbolize monumental declarations. The opening of Revelations' scrolls (New Testament) comes to mind, as do the Hear ye! Hear ye!s found in film and literature. When a scroll is rolled up, it's unreadable—and therefore, contains secrets.

The origins and meaning of TORA (and even Tarot, itself), is hotly contested. Many take the easy route, connecting TORA with the Hebrew Torah (the first five books of the Old Testament, known as the Pentateuch, the cornerstone of Judaic Law). In his 1888 book The Tarot, Samuel L. Mathers recombined the letters T-A-R-O in several permutations, connecting them to the essences of the Major Arcana cards. In the book The Complete New Tarot by Onno and Rob Docters van Leeuwen, the authors provide an extensive treatise on the origins, meanings and benefits of connecting, chanting and singing permutations of T-A-R-O, especially with the Tarot Majors in mind. They liken TARO to an infinite loop, much like the ourobouros belt on the Rider-Waite's version of The Magician…especially with the additional T at the end.

Water – Water is refreshing, cooling and life sustaining. You can survive weeks without food, but only a few days without water. It often symbolizes the vast subconscious, although water also plays a prominent part in spiritual rebirth or dedication rites through baptism, sprinkling holy water, bathing in the river Ganges or ritual cleansing.

Veil – Veils conceal. From the Islamic burka to the gauzy masks of Turkish dancers to white bridal coverings to black mourning garb, veils conceal all or parts of the face. However, the High Priestess doesn't wear a veil but, rather, there is a tapestry "veil" connecting the two pillars. According to the Bible, there was a thick curtain separating the Holy Place from the Holy of Holies in Solomon's Temple (see Hebrews 6:19; 9:3 and 10:20 in the New Testament), which is referred to as a "veil". In Matthew 27:51, it is reported that that the "veil of the temple was torn in two from top to bottom: and the earth quaked, and the rocks were split" (NKJV) at the moment of Jesus' death.

Christian theologians say this signifies the ripping of the partition between man and God, allowing full access to Divine communion, without the need for a human mediator like a priest. Because the veil was ripped from top to bottom, it was an act of God, since it would have been much too high to be ripped by man, who would have started at the bottom. If the Latin Cross symbolizes the unequal balance of spiritual connection (the vertical, divine lines being longer)—with a spiritual "veil" still intact—then the equal-armed Greek Cross on the High Priestess could connect to the post-torn-veil state of union with, and free access to, God or Divine Knowledge.

In mystical spirituality, it's said that a "veil" separates the living from the physically dead; thus, contact with spirits goes "beyond the veil". During Samhain or Halloween, pagans often say that the "veil is thinnest" during that time; that is, the separation between the material and spiritual plane is more easily traversed.

In Phrygian myth, castrated Agditis became the goddess Cybele, the blood forming the first pomegranate tree; Associated with Persephone, Hades and the Underworld (death, life and rebirth cycle); Central to Eleusian Mysteries honoring Demeter and Persephone as the feminine source and symbolic of the continuity of life. In I Kings 7:20 (Old Testament), the pillars in the Temple of Solomon are said to have pomegranates above them, as well as "two hundred rows on each of the capitals all around". (NKJV)

What about you, dear reader? What symbols do you see in the High Priestess Tarot card? Feel free to leave your insights and comments for me!

Love this Janet. I usually think of the Priestess as being strongly feminine, but I love how you've shown that she has integrated elements of both.

Great to see you, Don! Thank you. :o) I think all Tarot cards are more integrated than we suspect...