"How the Grinch Stole Christmas" BIT Tarot Snapshot excerpt from The Back in Time Tarot courtesy of my publisher, Hampton Roads Publishing. 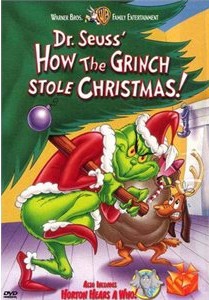 Widely known by his pen name Dr. Seuss, author Theodor Geisel (1904-1991) created a cast of lovable characters and wacky worlds in his children's books. From Horton to the Lorax, the Cat in the Hat to Marvin K. Mooney, Dr. Seuss's whimsical characters entertained children through dozens of books, some of which were turned into animated specials and feature films.

One of the most famous of Seuss's characters was the leering green monster with "termites in his smile" and "garlic in his soul": the despicable Mr. Grinch. Based on the children's book, the TV classic How the Grinch Stole Christmas featured the voice talent of Boris Karloff (who played Frankenstein and starred in other horror films), animations by Chuck Jones (who also drew the Warner Brothers' characters the Road Runner, Bugs Bunny, and Pepe Le Pew), and special song lyrics by Seuss himself. This amusing tale of redemption takes viewers from the Grinch's mountainous cave down to the cheery hamlet of Who-ville, where the "cuddly as a cactus" villain attempts to wipe out Christmas.

Ten of Cups: The story begins with a circle of joyous creatures, called Whos, singing in the center of Whoville. Besides thinking of a happy family when I see the Ten of Cups, I also associate this card with harmonious relationships and cooperation. Some renderings of the Ten of Cups show children holding hands or couples embracing--a fitting image for the good-natured Whos!

Four of Wands and Seven of Cups: With their dizzying array of musical contraptions, festive boisterousness, and glorious feasting, the celebratory Four of Wands just didn't seem to be enough to capture the wonder of the Whos. Although the Seven of Cups can be a "castles in the air" card, I tend to view this card with great fondness: so many choices, so many opportunities--which do I focus on today? I sometimes think of the Seven of Cups as the "life is a buffet" card. The Whos seem to have many material distractions readily available, and they enjoy them immensely. However, as the end of this story shows, their amusement arises from something much deeper and is independent of frills, thrills, and even food.

Five of Swords and Seven of Swords: For over fifty years, the Grinch put up with the happy Whos. One day, a menacing smirk creeps upon his visage when he gets a "wonderful, awful idea": "What a great Grinchy trick! With this coat and hat, I'll look just like Saint Nick!" I chose the Five of Swords to express this sentiment because it depicts a gloating man appearing to best two others who are walking away, maybe dejectedly.

Because the Grinch has a heart "two sizes too small," the jubilation of the Whos sets his teeth on edge, and he's determined to destroy what he thinks is the source of their happiness. The Grinch feels that it's him against them, and he plots to ruin the Whos' Christmas by demoralizing them, assuming they'll cry "boo hoo" when they discover that everything--light bulbs, poinsettia petals, and even ice cubes--has been taken from them.

The Seven of Swords shows a figure walking away from a group of tents with an armload of blades--a picture that some interpret as theft. When the Grinch stealthily takes every bauble, morsel, and stocking from Whoville, he resembles the figure on the Seven of Swords.

I also tend to think of the Seven of Swords as the "wolf in sheep's clothing" card in certain instances. When little Cindy Lou Who catches the Grinch taking away their decorations, the "smart and slick" Grinch, dressed in a Santa suit, thinks up a lie on the spot. He quickly notices a burned-out light on the Christmas tree and tells her that he's taking the entire tree to his workshop to fix it. The Grinch goes so far as to give Cindy Lou a drink, patting her on the head with faux kindness.

Six of Cups: With her wide-eyed innocence, Cindy Lou Who embodies the naiveté of children. In her world, it's inconceivable that someone would brashly enter her house and steal everything for the express purpose of causing grief. She believes that the Grinch is indeed Santa, and her trust borders on heartbreaking. Originally, I thought of the Sun card to represent Cindy Lou Who, but this scenario reminded me of the times when a trusting child is left in the presence of a predatory adult--and the pain and loss that can often ensue. (If you look closely at the Universal Waite image, a guard seems to be ascending the stairs to the left, leaving the child unattended in the presence of a larger person.)

In the Universal Waite deck, the Six of Cups shows a taller figure handing a cup of flowers to a little girl. This taller figure appears to be wearing an elflike costume and is almost double in size compared to the little girl. Although this card is sometimes interpreted as reconciliation, nostalgia, innocence, sharing, compassion, simple gifts, and childhood, there seems to be a sinister element to the Rider-Waite rendering of the Six of Cups when viewed in a particular light. It seemed like the perfect choice to represent the scene where Cindy Lou gently confronts "Santa."

The Devil: The Grinch enslaves his dog, Max, forcing him to carry loads much heavier than his little body. A circular attachment connects the dog's harness to the Grinch's getaway sleigh. Interestingly, in the Universal Waite image, a similar circular fixture connects the Devil's perch with the enchained humans.

The Grinch wrongly assumes that depriving the Whos of their material goods will result in sadness and despair. The flip side to this belief is, of course, that material abundance brings joy and contentment. One of the ways I view the Devil card is the insatiable belief that things equal happiness or that the relentless pursuit of the new and improved will fill an emotional void. Because the Grinch thinks that materialism is the source of the Whos well-being, he assumes taking just about everything they own is the same as stealing Christmas from them.

Judgment: On Christmas morning, the Grinch gleefully anticipates the wailing of the Whos, but boy is he in for a surprise. Instead of hearing boo hoos, a "glad sound reached his ears. All the Whos were singing without any toys. Somehow or another, Christmas came anyway! It came without ribbons, tags packages, or bags!" It is in that moment that the Grinch has an epiphany: "Maybe Christmas . . . doesn't come from a store--maybe it means a little bit more."

When the Grinch sees the error of his ways, he has a literal "change of heart," because his heart "grew three sizes that day." He blew on his trumpet, returned all the games, food, and decorations, and even joined the Whos at the supper table, carving the roast beast. When I see the trumpet blowing angel in the Judgment card from the Universal Waite, I think of a wake-up call that results in changed behavior--just like the Grinch experienced.

Ten of Cups: I chose this card to frame the beginning and the end of How the Grinch Stole Christmas because the Whos' joy and well-being remained the same--independent of the machinations of the Grinch and their personal losses. The end of this heart-warming story sums up my view of the Ten of Cups quite nicely: "Christmas day will always be just as long as we have we. Welcome Christmas while we stand, heart to heart and hand in hand.

One of the ways I see the Judgment card is "turning over a new leaf," or the realization that some approach or belief system just isn't working for us. Whether this conscious acknowledgment comes as a result of the Tower, the Devil, the Hanged Man, or other archetypal energy, the "aha!" moment of realizing what will invite or promote our personal heaven on earth can be a gloriously pivotal moment. (Two great books on this topic are Loving What Is by Byron Katie and What God Wants by Neale Donald Walsch).

Do you enjoy this way of learning the Tarot? If so, get yourself a copy of my Back in Time Tarot (print book or for Kindle), which features over 100 Your Turn exercises for practicing connecting pop culture with the cards.