Let's hack the symbols in The Magician Tarot card from the Rider-Waite-Smith tradition. 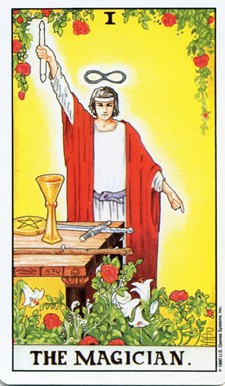 First movement; Breath of life. The numeral 1 is upright and phallic, a masculine number of initiation. It links Above and Below.

The right hand is active, masculine and logical--connected to the left brain. The upheld arm suggests the active pursuit--a "reaching for"--of Source energy (Higher Self, the Divine, archetypal realm, etc.)

A pure channel of spiritual wisdom and clear inspiration. Because it's double-tipped, it "works both ways". That is, The Magician not only reaches for the Divine (or Higher Realms)--putting his/her attention (and intention) skyward--but also serves as a conduit from Above. It's phallic shape echoes the numeral 1. The Magician grips the wand, suggesting a firm grasp of both intention and will.

Manifestation on the earth plane. Not only is The Magician willing to seek Higher Wisdom and channel it earthward, but he's also willing to "point the way"--showing initiates that they, too, can manifest etheric ideas, substances and energy into the denser material realm. Whether he actually shares how to do it is a different matter altogether...

The "figure 8" signifies eternity, as well as the infinite capacity for creativity. As long as The Magician holds his active, right arm upward and his left arm downward--willing to remain an open 2-way channel of universal energy--he retains the ability to create and re-create at will in the material plane.

The snake is another phallic symbol. In Ancient Egypt the cobra symbolized divine wisdom, while in Oceania, the snake is a creator figure connected to pregnancy. It's lidless stare connects to all-seeing wisdom, suggesting that The Magician refuses to look away from uncomfortable truths--and enters the creative arena with "eyes wide open". The snake eating itself speaks to the power of reinvention. At any time--with will and intention--we can shed our "skin"...and don or "grow" a new one.

The intertwining of both the red roses and white lilies indicates the fusion of human passion and incorruptible psychic integrity. Both are needed to "grow a garden" of creative beauty.

A table symbolizes an area of attention. When we "put something on the table"--or "lay our cards on the table"--we signify a willingness to disclose our thoughts, feelings and intentions to others in order to discuss or evaluate them. When we put the intangible to words or actions, we begin the process of manifestation on the earth plane. Once something's "on the table", it can't be retrieved or easily reversed back into the etheric plane. A table is also used to "hold" things or make them easier to examine. The Magician needs a "place" to channel his energy and focus his will. Three etched symbols are on the wooden table in the Universal Waite Magician Tarot card. They appear to be waves of water, tongues of fire and a dove (similar to the one on the Ace of Cups, except this dove is facing upward, not downward).

Could it be that this three-symbol code says, "When you start with water (feeling) and add fire (passion), the result is steam (ideas) that flows upward as vapor...only to condense once again on the earthly table of manifestation"? After all, the water cycle certainly echoes the snake eating its tail...

Yet again we have echoes of the four elements and the Tarot's Minor Arcana suits: Cup (Emotions); Wand (Will); Sword (Intellect); Coin (Physicality). The Wand and Sword are both phallic (and thus masculine/active), while the Cup and Coin are both vulvic (and thus feminine/receptive). Both Yin and Yang are necessary to create...and to make magic.

The Magician is master over the four elements and the realms they govern. The four elements are a rich and fascinating exploration, especially since the Aces embody them and the Minor Arcana suits reflect them....and they're right on the Magician's table.

Let's take a closer look at the four elements, keeping in mind the other symbols we've already spied in The Magician.

Usually, and from my experience, associations and issues connected with the four elements and suits are:

WATER - Cups, chalices, bowls, hearts or other receptacle for holding. It is considered feminine/passive in nature. Colors often used in Water cards are deep blues, aqua and, in some cases, gold (in terms of cup color and preciousness). WATER/CUPS connects with relationships, intuition, feelings, dreams, the unconscious/subconscious, psychic phenomena, empathy, compassion, forgiveness and matters of the heart. Its energy is of a slower nature--steeping, stewing. In ancient Tarot de Marseilles style decks, CUPS was associated with the clergy. In the four-humor model, WATER is sanguine. In terms of Jungian function, WATER is Feeling.

EARTH - Coins, pentacles, disks, crystals, diamonds or other round object. It is considered feminine/passive in nature. Colors often used in Earth cards are greens and browns, sometimes gold (in terms of money). EARTH/COINS connects with the physical realm, such as material possessions, money, job, health, land, home and environment. Its energy is of a slower nature--cautious, methodical. In ancient Tarot de Marseilles style decks, COINS was associated with the merchant class. In the four-humor model, EARTH is phlegmatic. In terms of Jungian function, EARTH is Sensing.

FIRE - Wands, batons, staffs or clubs, its phallic shape connects it with the masculine/active. Colors often used in Fire cards are red and orange, sometimes bright yellow. FIRE/WANDS connects with passion, energy, enthusiasm, courage, gumption, vocation, career (as opposed to actual job), and many issues related to the "self" (as in, "self starter", "self propelled", "self possessed", etc.). Its energy is of a faster nature--sudden, and sometimes explosive. In ancient Tarot de Marseilles style decks, WANDS was associated with the peasant class. In the four-humor model, FIRE is choleric. In terms of Jungian function, FIRE is iNtuition.

AIR - Swords, blades, arrows or spades, its shape is also phallic, and thus masculine/active. Colors often used in Air cards are powder blue, gray, white and at times, yellow (especially pale yellow). AIR/SWORDS connect with the mental realm--thoughts, communication, decisions, beliefs, judgments, clarity of ideas, opinions and so on. Many people believe that thoughts cause suffering, not situations. Thus, AIR/SWORDS is often attributed to arguments, hostility, anxiety and suffering. In ancient Tarot de Marseilles style decks, SWORDS was associated with nobility. In the four-humor model, AIR is melancholic. In terms of Jungian function, AIR is Thinking.

What about you, dear reader? What symbols do you see in The Magician Tarot card? Feel free to leave your insights and comments for me!